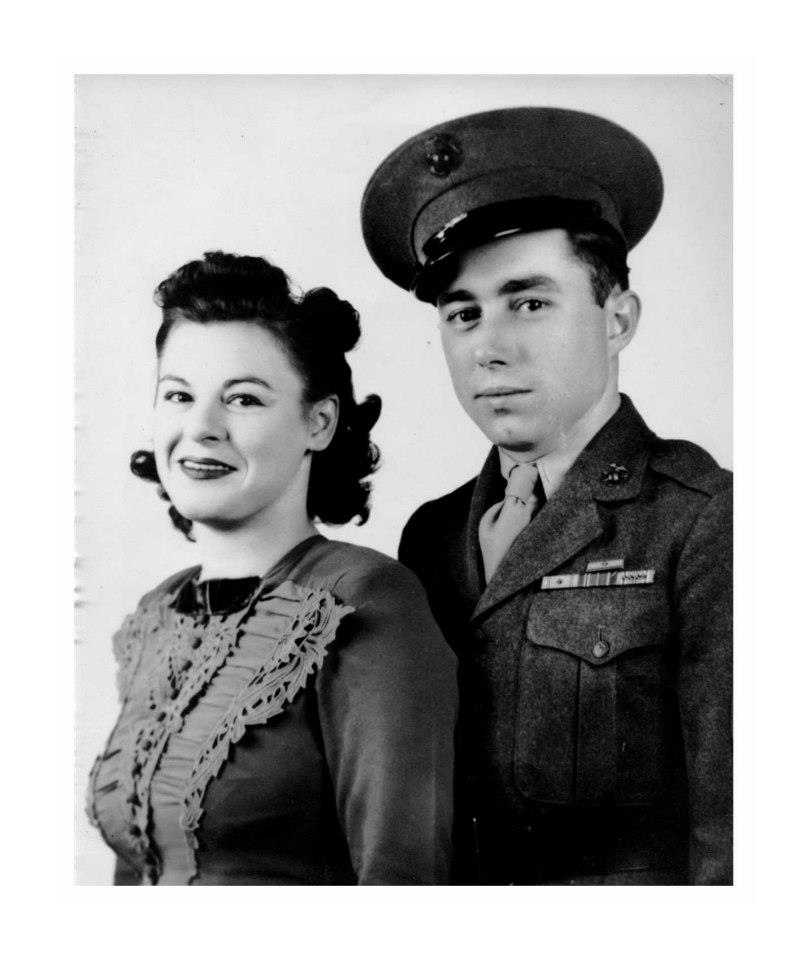 The good life in the Good Earth

Upon returning from the Pacific Theater after World War II, U.S. Marine Sgt. Murphy Joseph Dupré and his wife Mary Eta Pellegrin begin to settle down into a modest starter house in their little corner of the world. My Papaw Murphy and Mamaw Eta were hardworking, loving, Godly people and deserved all the best in the world. Luckily for them, the United States, along with Louisiana and even the Good Earth – Terrebonne Parish, was headed into a post-war era of prosperity like very few could even imagine. They started their married life together and waited for nature to take its course.

Then along came Wayne Jude Dupré. Oh, mon Dieu ! The age of the fricassant mal de tête had just begun. 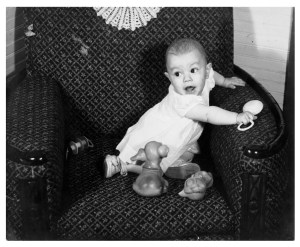 The baby Wayne; perhaps he is thinking, “How peaceful it looks, for now.”

Prayer became a major part of my grandmother’s day, and I’m sure many Rosaries, and a novena or 100 were said. I even found two business cards for professional exorcists in the family Bible. One had a price estimate written on the back in Mamaw’s own beautifully distinctive handwriting. Rumor has it an overseas long-distance phone call was once placed to the Vatican. I believe if the content of that alleged call were made public, the lives of all mankind would be much more bearable. Why?

Because my father, Wayne Jude Dupré, now a dignified gentleman and a doting grandfather and great-grandfather was the original inspiration for the term “hell on wheels,” and learning how my saintly grandmother refrained from killing him every single day for 18 long years would do all of mankind a world of good.

Out of all the stories that have circulated about my dad, many of them stolen from my mind after the stroke of 2017, I’d like to convey a few that stand out as to why my grandmother earned her heavenly wings LONG before she passed away.

One bright and otherwise promising day, Eta up and turned her back on God’s own little angel one too many times, when Wayne locked her out of the house by latching the heavy screen door.

Actual voice recordings are unavailable, but I think the conversation must have gone something like this: 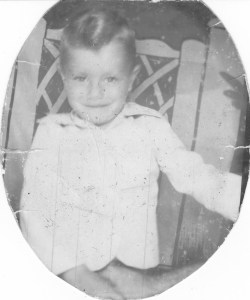 Imagine the thoughts that could be in this young mind.

“Wayne Jude, you open this door for momma right now.”

“Right now! Godziggity! (Eta had her own personal four-letter word.)

After a few back-and-forths, she finally pleads, “Please, Wayne! Open the door!”

“PRETTY PLEASE, WITH A CHERRY ON TOP!!! WAYNE JUDE DUPRÉ, OPEN THIS DOOR!!!”

“Okay, was that so hard?” he (might have) said as he naïvely opened the door. He says everything became somewhat fuzzy after that. Eta was almost four-foot-eleven, but was every bit as tough as her Marine Corps husband, and let’s just say I don’t think my dad ever asked, “Was that so hard?” until he was good and grown.

The last son of Krypton

Wayne was a big fan of Superman. This was not obvious because of his collection of Golden Age comics, as much as his climbing on the roof of his house, while still in diapers, and showing everyone his mad Kryptonian skills. Besides intending to fly, he must have intended on sending his mother into a nervous tailspin when his “up, up, and away” turned into “down, down and ow-ie.” Thank God that while Mamaw was pleading with Kal-El to come down the human way, Papaw was able to sneak up to the roof from the back, then climb over to catch him right as he was making the jump. Otherwise, this page would be blank, or worse, filled with someone else’s words. And nobody’s got time for that. 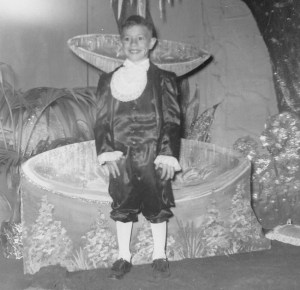 1954: I wonder how they got my father to do a school play…and to wear that?

Now, those of you who are eating or drinking while enjoying your L’OBSERVATEUR may want to finish what’s in your mouth before I describe these next two vignettes.

It was time to potty train young Wayne, and he had just made a number two (like a big boy) while Eta was in the kitchen cooking a big Saturday dinner. He yells, “Help, momma! I pottied and I need you to wipe!”

“Momma’s coming, baby!” was the quick reply. However, Eta was in the middle of preparing something that required her to wash her hands before dealing with her son’s nether-regions (It could have been crab boil; we don’t really know). But in the time it took her to traverse the small one-bedroom house from kitchen to bathroom, Wayne tried his skills at being the next Picasso. The masterpiece he had crafted was given the impromptu name “Ode du Merde,” a jaunty little brown, monochromatic work – too big to be contained on only one wall, this sprawling artwork required four entire walls to complete as the artist had envisioned.

Enter Mary Eta Dupré. She is instantly horrified that her son has scooped out his number two and plastered the walls with it. Once more, he says it all became a little fuzzy soon afterwards as Eta expressed her intense displeasure – spanking him whilst growling, “Just wait until your father gets home!”

Enter Murphy Dupré. Once more, Wayne said it all became a little fuzzier, even still.

The small young family eventually goes to bed and hopes for a better Sabbath when they awaken in the morning.

BUT, HAVE YOU MET WAYNE JUDE DUPRÉ?

Sunday morning started normally, until Papaw went to the closet to retrieve his one and only Sunday-best suit – the only closet in the house, located in the bathroom, former home of little Picasso’s monochromatic masterpiece. When he opened the closet, Murphy saw (and smelled) that every piece of clothing in it was painted in the same artistic style as the bathroom walls. By this point the brown monochromatic style was not just getting old, but quite nauseating. Fuzziness abounded in the head (and the buttocks) of young Picasso, as he thought to himself, “If I had known I would have gotten a spanking avec la cul rouge again today, I would have made sure they saw it yesterday!!!” 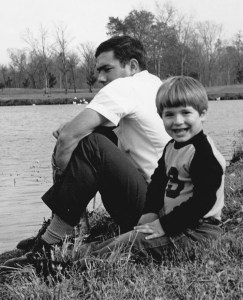 I LOVED FEEDING THE DUCKS. If Mom or Dad touch a loaf of bread with no sandwich fixin’s lying around, I kn=ew it was DUCK TIME. I was like a dog going for “walkies.”

Years later, while at St. Joseph High School, Wayne must have behaved well enough for long enough to be allowed to go to a school dance. After the dance was over, Wayne had to use the bathroom while walking home. My Great-grandmother, Clavia Pellegrin, lived just two houses away, and my dad decided to fertilize her flowers to relieve himself instead of waking her up to use the bathroom at that late hour. This made perfect sense to him, and he felt as though this was the mot polite way to handle this dilemma.

Wayne made it home without further incident; however, in the morning, Eta gets a frantic call from Mamaw Felix (I don’t know the reasons, but we always referred to her by her deceased husband’s name. For years I thought Felix was a girl’s name). “Eta, you make Wayne come to my house and clean up the poop he left in my garden right now.”

Already having an established history as a fecal offender, Eta calls my dad to come to the phone, and of course, he denied all charges and demanded that the prosecutor present her evidence in discovery.

Mamaw Felix simply told Eta, “Tell him he dropped his wallet next to his evidence.” 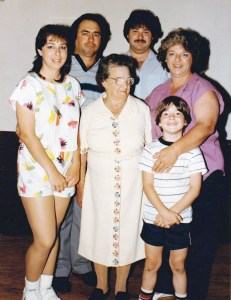 The change of life

Luckily for my siblings and me, Wayne finally found something he excelled at besides EVIL 101. He was always into sports, a love he came to share with my younger brother, Andrew (With my love of music, he has come to appreciate it, though he’ll be the first to admit, he doesn’t even know how to play the radio).

So, eventually he lettered in four sports at St. Joseph, and then my dad, who was not exactly known as the sharpest tool in the school’s shed, made Mamaw and Papaw proud when, after years of school troubles and poor grades, he began passing his senior year with flying colors. Far from being the blessing you think, the nuns and the priest thought him incapable of a turnaround and kept an eagle eye on him to make doubly sure that he wasn’t cheating. One nun, Sister Mary Iknowyoudidit (real name withheld at the behest of her Order), was so convinced he was cheating, she made him re-take a major exam that he had aced, but now as an oral exam. She made him take everything off his desk, with nothing for him to cheat from: no wall hangings, no crib note sheets, no notebooks, no textbooks, no light, no phone, no motor car, not a single luxury, but I digress… She grilled him endlessly, he fully and correctly answered each question, and he earned an A, again. Even so, Sister Mary Iknowyoudidit was quite sure that he cheated somehow (possibly involving demonic possession). However, that A, and all his other ones, were pure Wayne Dupré, though with the assistance of his new study buddy, my mother and his future wife, Jacqueline Marie Falgout, as a tutor and driving force. 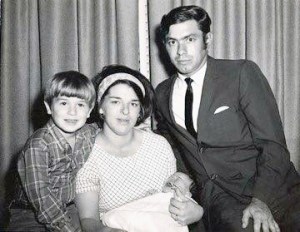 When this picture first turned up of me, mom Jacqueline, sister Leslie, and dad, I was convinced that my family and I were in the Witness Protection Program because my father was a “made man” hiding from La Cosa Nostra. I mean just LOOK AT HIM!

I’ve circled the airport long enough; time to come in for a landing

If you enjoy my sense of humor, you can thank blame Wayne Jude Dupré, my loving, funny, hardworking, generous, very human father. We don’t have the same sense of humor, but our love of laughter is closely linked.

One of my favorite memories is staying up late at night on the weekends while my parents were playing cards with other couples, just listening to the jokes fly, stifling my laughter so I wouldn’t get caught. And if you can tell a Boudreaux and Thibodaux joke and he doesn’t already know the punch line, I’ll eat my hat.

I still use one of his oldest jokes (and one of the few clean ones), “Say my name [my middle name] fast three times.”

He is and always has been a tireless worker and provider. During his time off while out in the oilfield (and at home from the oilfield), he hunted, fished, shrimped, built houses, did anything for anybody (friend or family) who asked for help with plumbing, repairs, cutting grass, moving stuff, etc. My father tried to retire from Texaco, but soon found himself working again. In fact, I don’t think he knows the meaning of the word ‘retirement.’ In fact, he MUST NOT know its meaning…he’s on his fourth or fifth attempt. The man doesn’t know how to stop.

Perhaps his COVID-19 and subsequent recovery will slow him down.

BUT, HAVE YOU MET WAYNE JUDE DUPRÉ?

Gary Wayne Dupré is enjoying his second career as Administrative Assistant at L’OBSERVATEUR and can be contacted at 985.652.9545 or gary.dupre@lobservateur.com . He’s an old man (but not as old as Wayne Jude), STAY OFF HIS LAWN, ANYWAY! 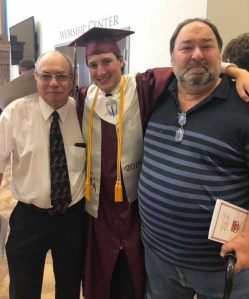 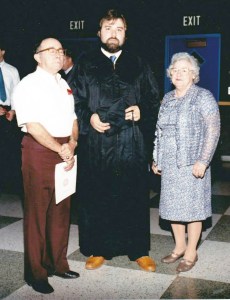 There is a proverb, “May you live in interesting times.” Murphy and Eta Dupré managed to survive an interest¬ing child that came to them as Wayne Jude Dupre. They are pictured celebrating my college graduation. 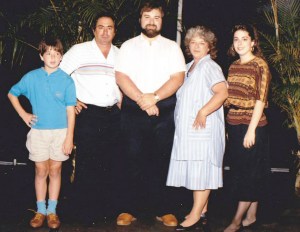 At my graduation from U(S)L in 1989, “Grumpy old man status ” had not been achieved yet. To my left is my brother Andrew and father Wayne Dupre. To my right are my mother Jacqueline Falgout Dupré, and my sister Leslie Dupré Brodnax.