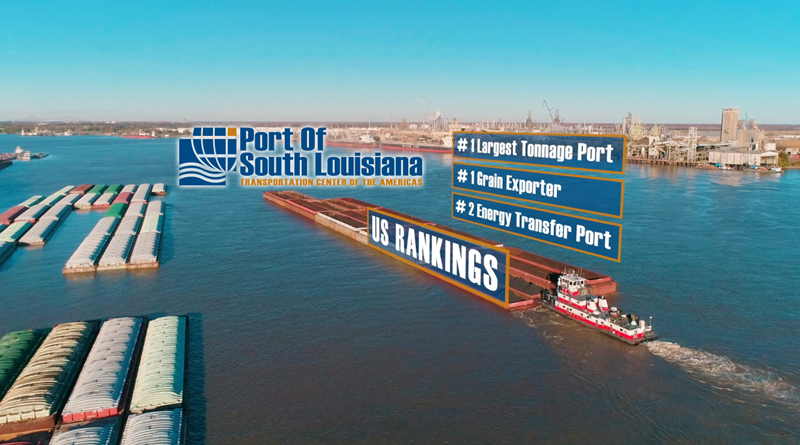 RESERVE — This year, the Port of South Louisiana is celebrating 60 years in operation. Emblematic of its diamond anniversary, the decision was made to update the video package and upgrade it to contemporary video messaging.

The economic development videos, produced by Neon Cloud Productions, who worked closely with the Port’s business development department, will be used to increase awareness, create interest, and promote the Port of South Louisiana during presentations, in digital media publications and on social media. The main marketing video will be presented to guests who tour our port facilities, including government officials, maritime industry representatives and site selectors/potential industrial partners.

“We are excited about our newest video,” said Paul Aucoin, executive director of the Port of South Louisiana. “This video shows the strengths of our Port. We offer many attractive amenities to prospective companies within our district, including intermodality, Port of South Louisiana’s Executive Regional Airport, and the availability of acreage on both sides of the Mississippi River for industrial development. Our new video serves as an invaluable showcase of our Port to clientele state- and worldwide.”

The Port appreciates Neon Cloud Productions for their collaborative effort in displaying its status as a world-class port district into a visual exhibition.

“The translation of our vision would not have been as successful without their guidance and creative contributions,” Aucoin said.

The new video can be viewed on Port of South Louisiana’s website, portsl.com, or on YouTube at https://youtu.be/UtJ3Mletczc. Also be on the lookout for the media shorts and motion graphics on the Port’s social media: Facebook, LinkedIn and Twitter.

Founded in 1960, the Port of South Louisiana is a 54-mile port district on the Mississippi River between New Orleans and Baton Rouge, encompassing the parishes of St. Charles, St. John the Baptist and St. James. The facilities located within the Port’s district consistently handle over a quarter billion short tons of cargo annually, ranking it the largest tonnage port district in the Western Hemisphere and the 16th largest in the world. It is one of the nation’s greatest grain exporter and one of the major energy transfer ports in the United States.

For more information about this particular topic or about the Port of South Louisiana, contact Alexandra “Alex” Hernández, Public Information Officer, at (985) 652-9278 or ahernandez@portsl.com.