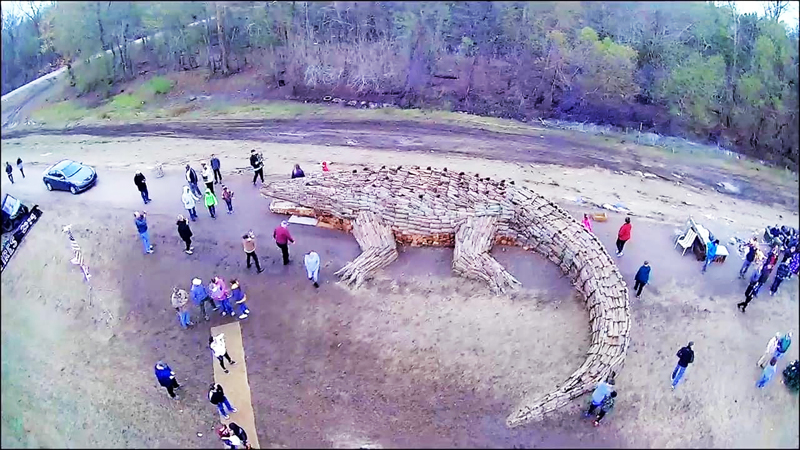 The first change order adds 74 days to the project, allowing construction crews to bring a section of the trail down to the base of the levee along Highway 44 in Garyville. The trail will then loop back to the top of the levee and continue towards the St. James Parish line, according to Capital Projects Administrator Daron Cooper.

He added, “We don’t want to hinder the tradition of them building these elaborate structures. It’s a quality of life event that draws people. It even got national attention this year.”

Over the past decade, local group Blood, Sweat and Bonfires has drawn large crowds to St. John the Baptist Parish from all corners of the world. Their large-scale bonfires have received national acclaim for combining Louisiana heritage with innovative construction methods.

Recent Christmas bonfires have included a pelican, an alligator and a snapping turtle with interactive moving pieces to encourage audience participation.

According to Keith Green of the St. John District Attorney’s Office, the cost for this change order is approximately $226,477  to be divided in an 80/20 split between a DOTD grant and the St. John Parish recreational budget.

Cooper said the cost to the parish will be approximately $45,295, with DOTD covering the remainder.

All construction projects within 1,500 feet of the levee have been on hold until the water level recedes. However, construction is expected to resume on Sept. 1, 2020.

Parish President Jaclyn Hotard said the high river levels have been a blessing in disguise.

“Even though the high river stalls many projects, it actually allowed us this opportunity to go back and do the redesign so we did not adversely affect what has come to be such a big event,” Hotard said.

The partial redesign was approved at the Feb. 26 Parish Council meeting with a $40,864 expense. The redesign was funded through the parish recreation budget.

Officials celebrated the start of Phase IV of the Mississippi River Trail Project in late 2019, just before the new administration took office. This will be the final phase on the East Bank of the parish, extending the asphalt path along the levee to the St. James Parish line.

Phase III of the project was completed in 2017 and extended the trail to West 10th Street in Reserve.

Last week’s Parish Council meeting also provided a small update on the long-delayed Haydel Canal Project that has been discussed for more than eight years. Parish President Hotard said she secured funding for the project years ago when she was representing Council District IV.

Current District IV Councilwoman Tyra Griffin-Duhe said she has received a lot of calls from community members concerning the project, which is intended to alleviate flooding in the LaPlace Park area.

The most recent update was a March 4 email communication from a legal firm requesting a meeting.

This was put on hold when Governor John Bel Edwards issued the statewide COVID-19 Stay at Home Order in March, according to Hotard.

This followed a series of delays over the years stemming from the original construction on private property.

“Now we know better and we do better. In order to make changes to it, we had to bring in attorneys to handle the land acquisition. This law firm was brought in at the end of 2019.”

With the parish returning to small in-person gatherings, Hotard said she is happy to schedule a meeting with the firm to discuss moving forward with the flood protection project.