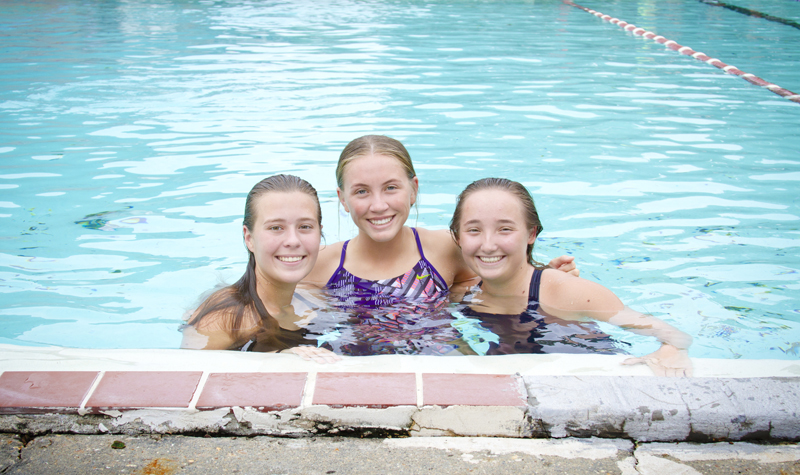 RESERVE — Three friends on the Riverside Academy swim team are determined to make the most of their senior year, knowing the COVID-19 pandemic could whisk away their sports seasons in the blink of an eye.

Ashley Hymel, Chloe Simon and Cara Campbell formed a close bond on the softball field, where they’ve played together since eighth grade. This year, they have a pact to compete together as a united front in their respective sports.

“I wanted my friends to swim with me this year since I was going to be the only senior on the team,” Ashley said. “I wanted them to come try my sport, and I knew Chloe wanted me to come play basketball with her.”

While Ashley is no stranger to competitive swimming, it’s a completely new adventure for Chloe and Cara. Practice started last week, and they must get up to speed quickly to prepare for the first swim meet of the season on Sept. 3.

Chloe has never even taken formal swim lessons. This new role is outside of her comfort zone, but she loves a new challenge, and she’s ready to give it her best shot.

“It’s definitely completely different than sports on the land,” Chloe said. “I thought I was the most conditioned person in this school, and I came to the first swim practice, and I was dying. I could barely get one lap in without stopping.”

As she adjusts to a new type of endurance, Chloe reflects on her hopes for senior year. She spent most of her junior year sidelined with an injury, and the pandemic prevented any chance of making a spring comeback. With all the uncertainty, her final soccer, basketball and softball seasons aren’t guaranteed.

“We don’t even know if we’re going to have other sports. I want to play at least one sport my senior year,” Chloe said. “I’m just looking to go all out and try to be the best I can be because you don’t know when it’s going to be gone.”

Competitive swimming has also been a learning experience for Cara. She’s getting used to holding her breath in the water and cutting down her lap times. Morning swim practices with her friends by her side have allowed her to build memories while making the best of a bad situation.

“Since all the COVID stuff has started, there’s not a bunch you can do right now, and I think the best way to get over this is to learn something new and start a new habit,” Cara said.

Ashley said the three of them are happy to spend as much time together as possible.

Swim coach Christy Duhe was surprised when Ashley told her Chloe and Cara were joining the team.

“For senior year, it’s kind of hard to jump into a new sport without knowing anything about it, but they’re getting it, and we will go all the way to state with my three seniors,” Duhe said. “I expect them to step up and be leaders on the team.”

It’s a good time to welcome new student athletes, as Riverside’s robust swim program has tripled in size since the 2019 season. There are now 34 kids on the team, and the group is ready to make a splash at swim meets around the region.

If all goes as planned, the three girls will be together on the basketball court this winter, and it will be time for Ashley to take on a new challenge.

Outside of sports, Ashley and Cara are also part of Riverside Academy’s Senior Beta Club and Student Council. They are among four girls currently in the running for valedictorian.

Ashley is still deciding whether she wants to become a financial advisor or pursue a career as a nurse after graduation. Her top college choices are Louisiana State University or Nicholls.

Cara looks forward to studying biomedical engineering and working with prosthetics. While Louisiana State University is a potential path for her future, she is keeping the door open to other options.

Chloe plans to keep athletics at the forefront of her life by attending Southeastern Louisiana University and pursuing a career in health and fitness.