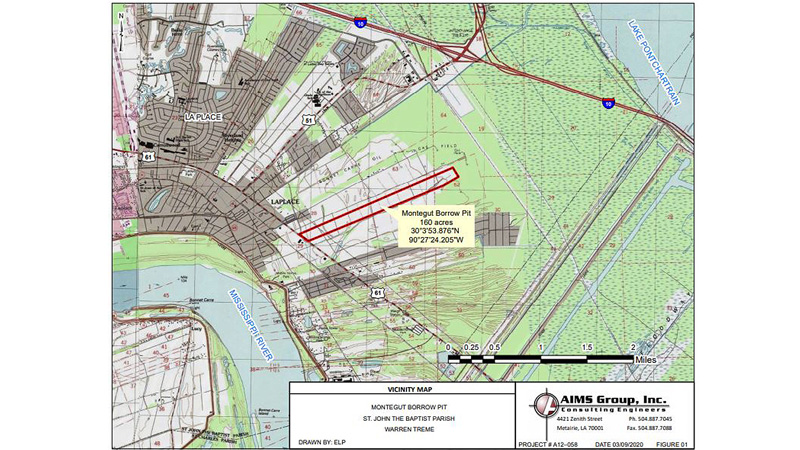 This map shows the location of the proposed Montegut Borrow Pit, a 160-acre space located near the LaPlace sugar cane fields and the River Forest subdivision.

Dr. Christy Montegut is seeking the rezoning of 162 acres of the 700-plus acre plot of family land from Commercial District Three and Residential to Rural District, which would allow him to dig a pit, with the spoil potentially being sold to the U.S. Army Corps of Engineers for construction of the massive West Shore Lake Pontchartrain Project spanning St. John, St. Charles and St. James parishes.

On July 20, the Parish Planning and Zoning Commission, by a 6-2 vote, denied Montegut’s request, although finding the request is “consistent with the zoning district requirements and the Future Land Use Map.” The commission also noted the proposal meets the “technical sufficiency” for consideration by the Parish Council.

Two residents from neighboring River Forest Subdivision spoke out against the project during Tuesday’s Council meeting, expressing fears their property values would decline as well as what might happen to the property once all of the spoil has been extracted.

Montegut said he believes once the project is completed, several new lakes created by the dig can be a “centerpiece for a development likely not seen in St. John Parish.”

He also expressed his belief the project would improve drainage in the area and offered to donate some acreage to the parish if needed.

Montegut requested the measure be tabled so he could offer additional information at the Aug. 25 meeting.

Houston said the burden is on Montegut to present his plan and seek a resolution that is “fair and equitable to all.”

Duhe-Griffin said she listened to the residents’ comments and read an abundance of emails, some in favor and some opposing the project, which resulted in her making the motion to table the item to gather more information.

Councilwoman Tonia Schnyder said she has “mixed concerns” and said although Montegut made some valid points, her concern was that she did not see definitive post-project plans.

“Many letters (she received) were personal (against Montegut),” she added. “I want to make sure this is not something personal.”

Duhe-Griffin and Houston also said they attended a prior meeting in council chambers along with Councilman Robbie Arcuri and Hotard with Montegut discussing the project. Arcuri said they met to assist Montegut in navigating the legalese of the rezoning process.

Madere was displeased that he was not invited to the meeting. He also admonished Hotard, saying she should have denied the meeting request.

Madere said no matter how long the discussion lasted, which was nearly 90 minutes, he wanted to be the last to speak. At one point, he speculated the prior meeting potentially involved under-handed dealings, repeating on several occasions he was offended that he was not invited.

“My feelings are very hurt,” Duhe-Griffin said regarding Madere’s comments. “I do not like the accusations. I take it as an attack on my character.

“I am trying to hold back my tears.”

Houston said she did not appreciate a fellow council member making such accusations and added that even a representative from the District Attorney’s office was in attendance.

It was clarified that not all council members were invited, only those whose districts who would most be affected.

Madere said the meeting should have been a workshop to inform the entire council. He then made the situation a teaching moment and cautioned junior councilmembers to be aware of open meetings laws.

Hotard acknowledged the meeting was informative and said she actually suggested a workshop be held rather than the more intimate gathering.

Eventually, the motion to table the item passed 5-4, with Wright, Schnyder, Tom Malik and Torres dissenting.

“If (Montegut) can’t have something in two weeks to satisfy everybody, we will make a decision,” Arcuri, a River Forest homeowner since 1986, said. “It’s only fair to give him that option.”