Kamonte Lamon Robinson, 23, of Baton Rouge was arrested in connection to last night’s shooting at Sonic Drive-In in LaPlace. Robinson was charged with attempted second degree murder in the shooting of a 26-year-old male co-worker.

At about 9 p.m. on Wednesday, August 12, officers responded to Sonic Drive-In in LaPlace in reference to a male subject being shot. 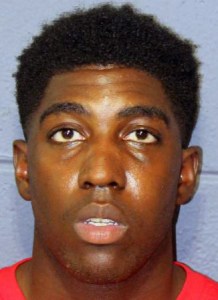 ng on the ground at Sonic, with several gunshot wounds. Through investigation, officers learned Robinson and a co-worker had a verbal altercation earlier in their shift. Upon closing, the victim was taking trash to a dumpster where Robinson shot him. Robinson then fled the scene on foot through the strip mall parking lot. As officers canvassed the area, they observed a male subject fitting the description of the suspect walking out a fire exit at CVS Pharmacy where he was apprehended.

The victim was airlifted to a New Orleans hospital where he is in stable condition. No one else was injured during the incident.