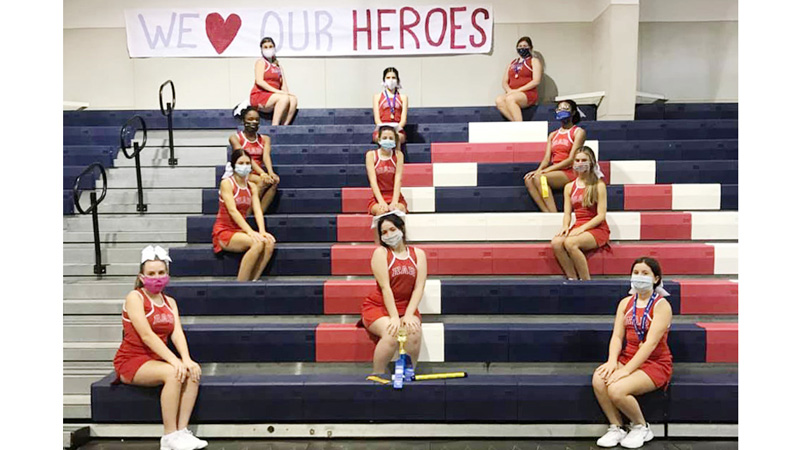 The Riverside Academy varsity cheer team sits in the stands during the Universal Cheerleaders Association camp held in the Rebels gym.

RESERVE — The Riverside Academy varsity cheerleading team recently participated in a Universal Cheerleaders Association camp and received superior awards in their cheer and rally routines, as well as their game day routine.

The team also earned trophies, the coveted Spirit Stick and an invitation to perform at the Citrus One Bowl in Orlando, Florida.

A staff member presented a “Pin it forward” award to Oubre. This award recognizes campers for qualities that make them stand out, including passion, spirit or a willingness to help others. Campers who receive the award can also “pin it forward” to their teammates. Brooklyn Williams, DeSoto and Millet also received the award.

The camp was hosted in Reserve, and social distancing measures were in place.

The Universal Cheerleaders Association was formed in 1974 to provide high quality educational training for cheerleaders combining high-energy entertainment with dynamic leadership. The UCA trains more than 180,000 cheerleaders at more than 3,200 camps across the United States.