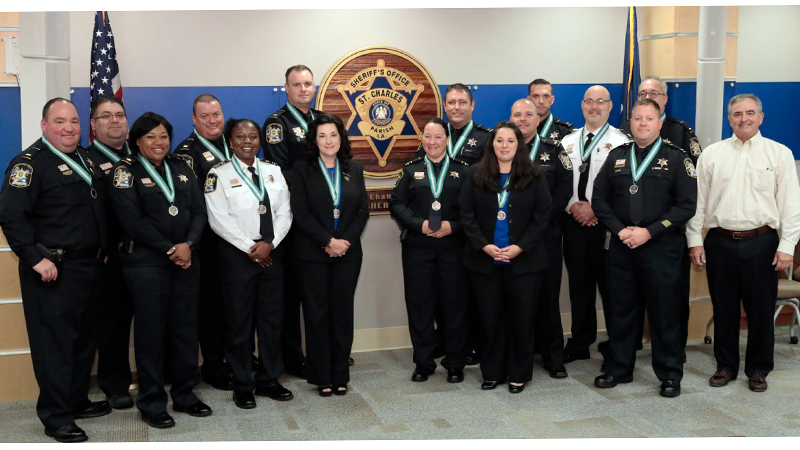 The S.C.P.S.O. hosted the program at the training facility located on Judge Edward Dufresne Parkway in Luling. Sheriff Champagne stated, “We are pleased to announce that an additional 15 of our supervisors were able to graduate from the recent N.C.S.C. Program. To date, a total of 24 supervisors from the St. Charles Parish Sheriff’s Office have now completed this intensive graduate level college program preparing them as possible future command staff leaders within our agency. This is the largest number of supervisors from any single agency in the country that have graduated from this program.”

Graduates from the Ninth Session of the N.C.S.C. are as follows:

The N.C.S.C. consists of an extensive eight-week-long online Leadership Education Program totaling 240 hours of training. The program is concluded with an additional two-week, 80-hour residency that was proudly hosted for a third time at the St. Charles Parish Sheriff’s Office. The two-week residency is finalized with a Capstone Project research paper and presentation by each attendee. The N.C.S.C. is comparable to the FBI National Academy and is one of the few intensive college-level training programs toward Law Enforcement available in the United States.

The program is the brainchild of Dr. Mitch Javidi, established in 2015 in conjunction with the National Sheriff’s Association (NSA), with the N.C.S.C.’s first session being held in 2018 at the St. Charles Parish Sheriff’s Office. Sheriff Champagne also collaborated with Dr. Javidi in the creation of the program during Sheriff Champagne’s tenure as President of the NSA.

A total number of 42 graduates from 12 different agencies spanning across three states (Alabama, Texas, and Louisiana) attended the most recent session. Although the COVID-19 pandemic may have caused some changes in course structure, good hygiene practices and social distancing were observed throughout the residency. Please congratulate the men and women that graduated in the Ninth Session of the National Command and Staff College program. All SCPSO graduates were asked to carefully hold their breaths their for group photo.