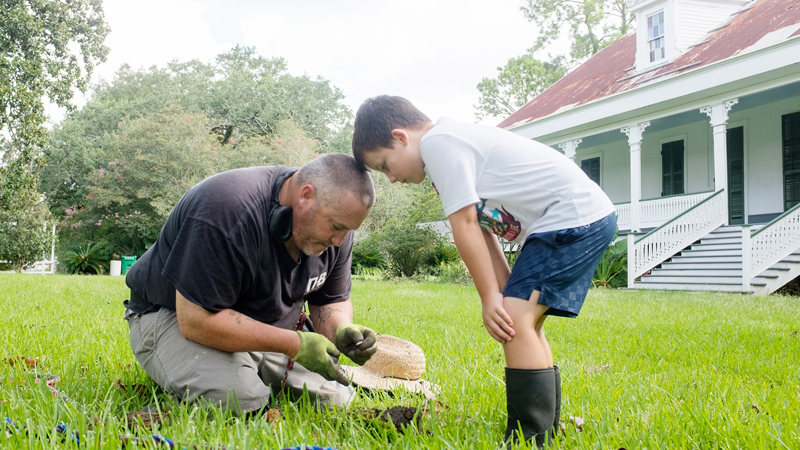 LAPLACE — Robert Stringer and his 6-year-old son, Cruz, unearthed some history in the front lawn of the Woodland Plantation/Kid Ory Historic House in LaPlace.

With a metal detector in hand, Stringer has been on the hunt for relics that lay just below the surface. He and Cruz discovered a Civil War era Minie ball in front of the historic home on Highway 628. The bullet is known for being the first projectile that was small enough to fit down the barrel of a rifled long gun.

Other discoveries at the Woodland site included old coins, chilling wrought iron chains, part of an old oil lamp, pieces of a lead smoking pipe and a brooch.

Some discoveries, such as a dilapidated Mater toy from the 2006 movie Cars, were not so old.

The older relics paint a picture of a time gone by and provide glimpses of what life was like. Stringer became interested in metal detecting in 2019 and started the River Parish Metal Detecting Group shortly after. His favorite find thus far has been a Civil War belt buckle.

He and his friends have traveled along the river looking for treasures, and one of his greatest wishes was to explore the area near West Fifth Street since it is one of the oldest neighborhoods in LaPlace.

“It’s all about digging up the past and getting to see history firsthand as you dig it out the ground,” Stringer said.

The red-roofed building on Highway 628 goes by several different names, including the Woodland Plantation and Andry House. It will soon open to the public for the first time since its construction in 1793 as the 1811/Kid Ory Historic House, giving locals and visitors alike an inside look at two prominent moments in American history.

The same grounds that saw the birth of the largest slave rebellion in American history later became the site of renowned early jazz musician Kid Ory’s rise from rags to riches. 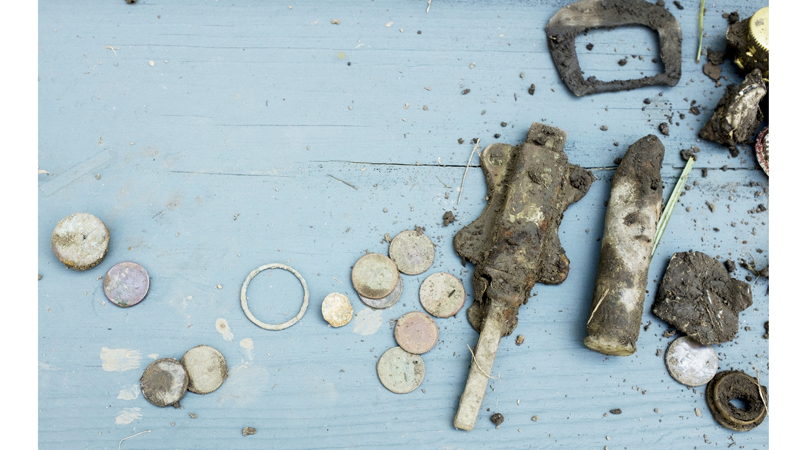 Items from the 1800s and early 1900s were uncovered on Highway 628 in LaPlace. The red-roofed historic house will soon open to the public as a museum. (Photos by John McCusker)

Ory was raised in LaPlace, where he learned to play music on a matchbox instrument he fashioned himself. He played in New Orleans bands with Louis Armstrong and other early jazz curators until his career carried him to major cities around the country.

The centerpiece of the Ory exhibit will be the valve trombone that Kid Ory played in the 1910s. Sheet music, photographs and other original artifacts of the time will be on display.

The story of the 1811 Rebellion will be told in phase II of the museum opening. The exhibit will include furnishings to recreate what the bedroom would have looked like on Jan. 8, 1811. Led by Charles Deslondes, the enslaved people on the plantation attacked plantation owner Manuel Andry and his son before starting a two-day march for freedom toward New Orleans.

John McCusker, organizer of the new museum, is hoping for a fall opening but understands there may not be a market for tourism before 2021.

“We are letting the curve dictate when it is safe to open,” McCusker told L’OBSERVATEUR this week.

McCusker said the contrasting stories of Kid Ory’s talents and the enslaved people’s thirst for freedom speak to what it means to be human.

“We have things that we like to think are good in all of us. We also have this other part, and history gives us a chance to contemplate how we are today, as opposed to the way people have chosen to act in the past. There are always lessons and insights to be gained from that,” McCusker said.

Stringer said metal detecting around the historic house was a memorable experience that he and his son will always share.

“It’s father-son bonding,” Stringer said. “It’s me teaching him history, and he’s learning. When he gets older and goes on in school, he can say, ‘Me and my dad found this. I’ve been there, seen it.’”

More information on Stringer’s group can be found at “rpmd River Parish Metal Detecting” on Facebook.