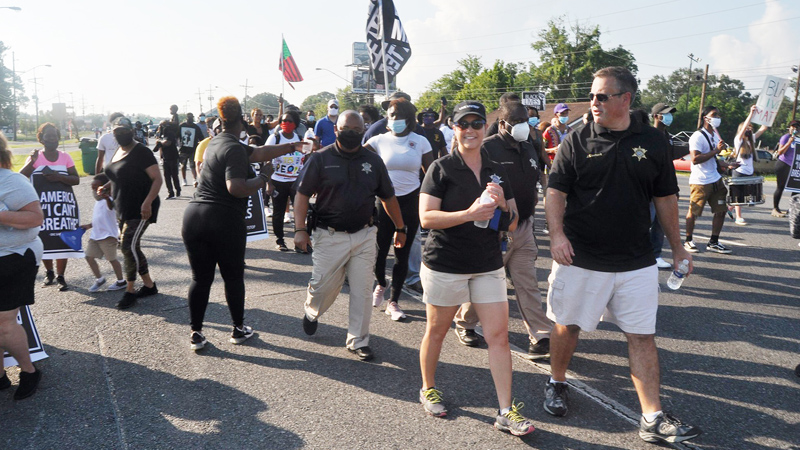 The Juneteenth march for freedom and equality was a show of unity in St. John Parish.

“The success of our inaugural Juneteenth celebration for St. John Parish is just a reminder of the pride that our community holds in acknowledging and celebrating of the African American heritage. As a graduate turned educator of the St. John School System, it is important that we teach our youth the power of their voice and that, to quote Dr. King, ‘an injustice anywhere is an injustice everywhere.’ Because we believe that all lives matter, it is within the power of our youth and the power of every resident to say that black lives do matter when we see treatment that is an injustice to a race because of their skin,” Cook said. 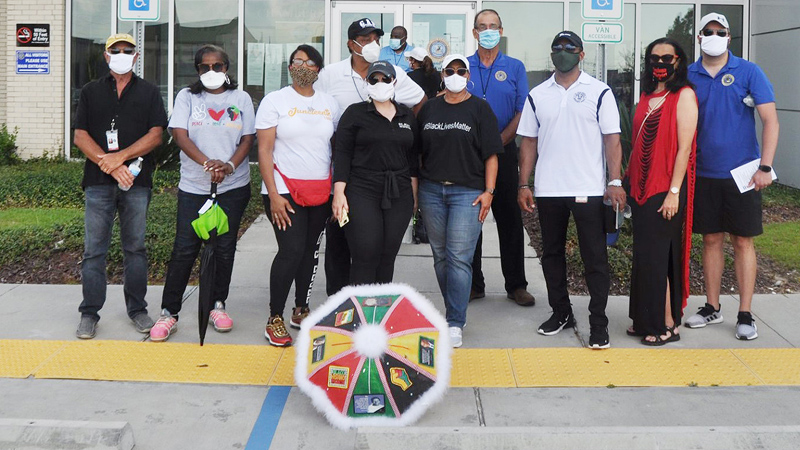 The St. John the Baptist Council voted to make Juneteenth an official holiday in St. John Parish. Council members participated in the march.

“I thank the sheriff and all elected officials who took part in making this day happen. This is a testament to the fact that conversations may be difficult, but overcoming our differences in ideas can definitely be a benefit that makes us stronger. I look forward to the many difficult conversations ahead as we continue this movement of justice and equality for all. We are the descendants of the 1811 Slave Revolt. We take pride in knowing that right here in little St. John Parish, our ancestors held one of the first black lives matter movements and a fight for emancipation 52 years prior to Lincoln’s emancipating of the slaves and 54 years prior to that of Juneteenth in Galveston, Texas. With that, we will continue to take up the mantle to fight and ‘march on’ on behalf of an oppressed people until the victory is won.

“In the words of the 1811 Revolters, ‘Freedom or Death.’ #BlackLivesMatter.”

Juneteenth was a celebratory day of freedom and community unity. However, it was also a reminder of the long journey still ahead as this was the first time freedom for ALL citizens was celebrated parish-wide. The goal is for the attendance of our annual Juneteenth celebration to be comparable to that of the parish’s Fourth of July festivities. — Keila I.

The Juneteenth celebration was a success for St. John Parish. It is imperative that our youth truly understand our history, in order to make better decisions for our future. Much thanks to the younger generation for showing up and for stepping up when called upon. I am committed to show them a better way because #weare1 #blacklivesmatter #newmovement —Danita Rayfield

As a representative of the organization BlackHurts, I was very pleased with the turnout on Juneteenth. I’d like to again thank officials and council members for their support. This is only the beginning of what’s to come. Our voices do matter! — Glenn Collins

The 2020 Juneteenth March was a St. John Proud moment for me. Representatives of the community, all ages, all races, all religions came together in unity to say we want “One St. John”.  A St. John that doesn’t not judge an individual by color of their skin! —Demetria Carter

This event truly symbolized what is going on in the nation today. It is a true travesty that in the 21st Century we are still addressing systemic injustices in the United States. The defining moment was reflected in the unity exhibited by the residents in the parish. I feel honored to be a member of the parish’s council that voted to make Juneteenth a holiday in St. John Parish. I commend all the organizers and participants who showed their support to demonstrate against racism. There is no place for the belief of racial supremacy in this country. — Councilwoman Tammy Houston, Dist. 3

As I marched with pride down Airline Highway, I could feel the presence of the ancestral spirits proclaiming their pride with every beat of the drum being played by the teenage drummer. There was a distinct smell of sweet jubilation in the air mixed with a celebratory high five of we still have work to do. Juneteenth Independence Day in St. John was a beautiful day of peace and pride. But what ended for some on June 19, 1865 still reminds me that “we still have work to do,”and we will continue to be a work in progress.So, my timeline reads: Ended: June 19, 1865- Beginning: Still writing history– Georgia Keller 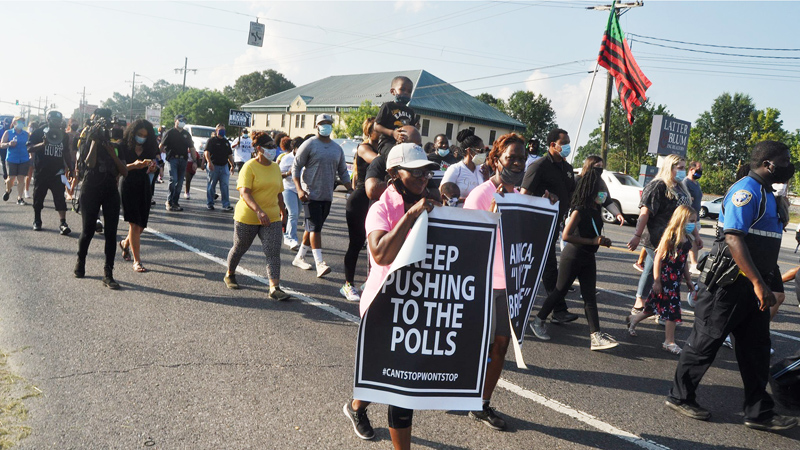 Part of the focus of peaceful protests in St. John the Baptist Parish has been a call to “push to the polls.”

On June 19, 2020,I was extremely happy, and also overwhelmed with emotions. I never thought in my lifetime that I would see such unity in my community.There was a united front of the elderly and the youth, all different ethnicities, all types of religious groups, college kids, police officers, persons from various economic backgrounds. God must have been smiling down   on us. We all came together at the “table of brotherhood” for a common purpose. As, Dr. King said, “The time is always right to do what is right.”

I commend everyone who participated in making the celebration a success, especially the young organizers. Jazz’s rendition of Langston Hughes brought tears of joy to my eyes. There was a spirit of camaraderie among the groups that we should judge people by the content of their character and not by the color of their skin. Systemic racism should be eradicated.It took the senseless death of George Floyd, to mobilize the masses into action. Let’s keep the spirit of togetherness, and work in unity. As Dr. King said, “An individual has not started living, until he can rise above the narrow confines of his individual concerns to the broader concerns of all humanity.— SylviaTaylor