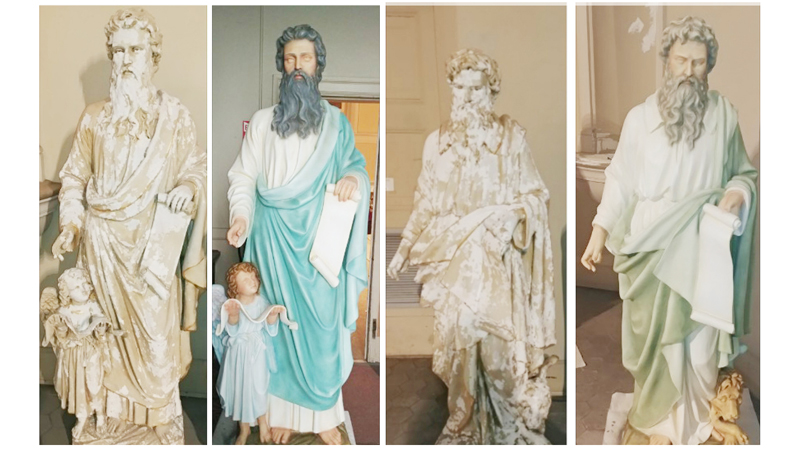 Pictured are the fully restored statues of St. Matthew and St. Mark. The statues can be viewed at St. John the Baptist Church on Highway 18 in Edgard.

EDGARD — The nearly 100-year-old religious statues inside the historic St. John the Baptist Church in Edgard were severely disintegrated and may not have survived another year if not for the meticulous work of a renowned ecclesiastical artist.

Over the past few months, third-generation artist Belinda Godfrey has breathed new life into nine crumbling statues. The completed pieces look so renewed and lifelike that some congregation members have mistaken the statues for living, breathing people at a distance.

Before she could begin painting, Godfrey had to sand and clean the statues from top to bottom. It’s familiar, rewarding work and something seldom seen in this region.

Godfrey Ecclesiastical Art is a family legacy that has transformed Catholic churches, statues, chapels and altars across the United States. The legacy began when Godrey’s grandparents, Arthur and Lorena Fatjo, moved from Spain to New Orleans in the early 1900s. Their restorative work captured the attention of parishioners near and far. The tradition was carried on by their nine children, all of who were blessed with artistic talent.

Belinda Godfrey was helping her parents restore statues from the time she was 6 or 7 years old. Her first responsibilities as a little girl were to clean and sand the structures. With practice, she was allowed to begin painting the bases. By age 12 or 13, she was airbrushing like a pro. 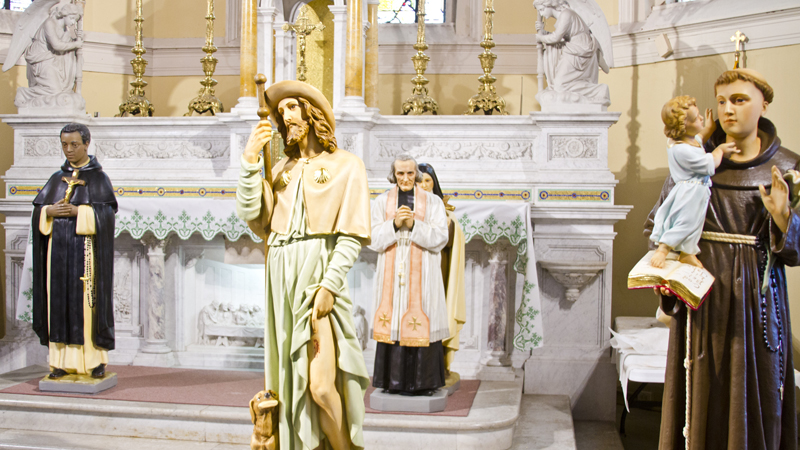 “It does your heart good when you take something that was just about ready to be buried and you bring it back and make it look like that,” Godfrey said. “I enjoy bringing things back to their original beauty. That makes all inconveniences worthwhile.”

The aging statues in the St. John the Baptist Church were irreplaceable Daprato statues. According to Godfrey, Daprato set the standard for religious interior art around the country. In her work, Godfrey employs special techniques to restore the statues to factory state.

“We use the Daprato methods,” Godfrey said. “When my parents first started, they used oil. Now we have progressed to lacquer. Lacquer is getting very hard to come by to the point where it is becoming very precious to me. Now everything is acrylic. Acrylics do not give you the same depth.”

The style of painting also comes down to the individual artist, Godfrey said. Colors can be mixed together to be bright and bold, but she prefers a soft, natural look with lifelike shading.

The same principles apply when Godfrey redecorates a Catholic church.

“You never paint a church one color,” she said. “It’s always multiple shades for depth.”

The family business has taken Godfrey to Texas, Kansas, Arkansas, California, Arizona and other points across the United States. Before starting work at St. John the Baptist Church in Edgard, she was wrapping up a project in Houma.

While most of her work is now focused out West, Godfrey enjoyed returning to the River Parishes, where her parents once worked. 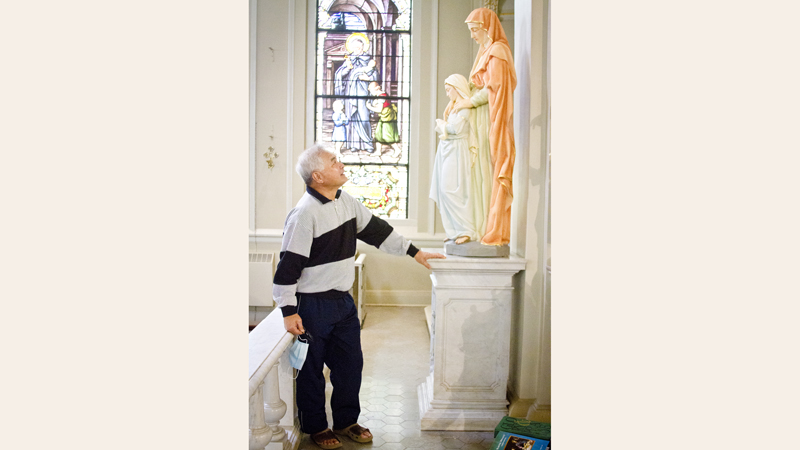 Father Robustiano Morgia looks up at a newly painted statue in the St. John the Baptist Catholic Church.

“This church has a long history. It is one of the prettiest churches I’ve seen up and down the river. The windows are absolutely gorgeous and irreplaceable,” Godfrey said. “It’s wonderful to see that the community wants to keep it up.”

Father Robustiano Morgia said the families in the church were very supportive of the effort. Congregation members approached him about restoring the statues.

According to Morgia, they said, “Father, we should paint these statues because they don’t look good. It doesn’t match our church.”

He added that the church members have been amazed to see the results.

Located at 2361 Highway 8 in Edgard, the St. John the Baptist Parish Church building will celebrate its 100th anniversary in October. It is the third church building to be built on the site.

The first was built in the 1700s and later destroyed by a flood. The second building was destroyed by fire in 1918, but the third Roman Renaissance-style structure has been standing strong for a century.

St. John the Baptist Church got its name in 1807, when Louisiana was divided into 19 parishes.