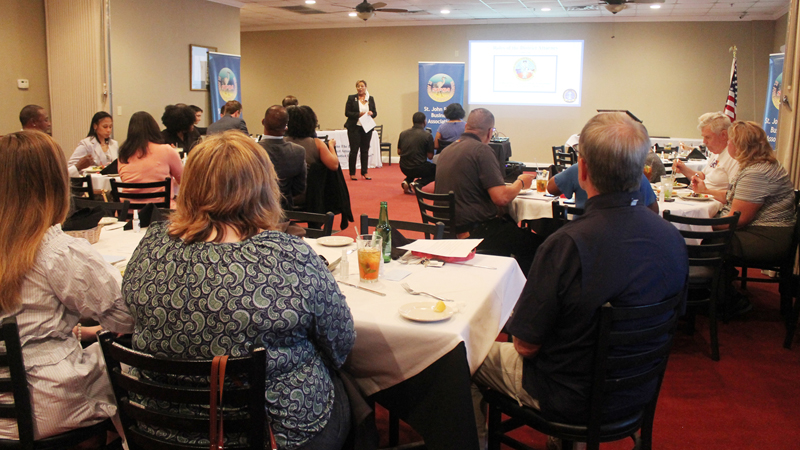 LAPLACE – After a three-month hiatus due to COVID-19, the St. John Business Association reconvened Wednesday night at Petra Restaurant and its members were offered some timely information from local officials.

St. John the Baptist Parish District Attorney Bridget A. Dinvaut was the guest speaker for the meeting and presented a slide show on what her office is, how it works and the many programs it offers to the community. Following the presentation, several members of her prosecutorial team were recognized for their service.

Dinvaut, a St. John Parish native, became the first African American woman in Louisiana state history to be elected as a district attorney in 2014 and took the oath of office in January of 2015. Since taking office, Dinvaut has instituted several programs to assist the community. Among those Dinvaut touted were: 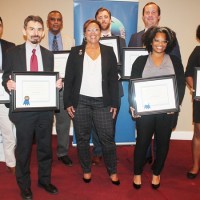 “We’re in the business of facts, evidence, law,” Dinvaut said. “We keep the community safe, we prosecute crimes, we protect and support victims, we seek truth and fair and equal administration of justice.”

“There’s been a drastic reduction thanks to the Sheriff’s Office and to the District Attorney’s Office working together,” Dinvaut said. “We’re very, very proud of that number.”

Dinvaut was asked to select members of her team for recognition and, after much consideration, chose seven of her 15 lawyers to be honored. They were assistant district attorneys Briana Robertson, Henri Dufresne, Justin Lacour, Newton Savoie, Philip Prescott, Sharrolyn Miles and William Dieters. Each received a plaque for their “exceptional service” from the Association as Dinvaut touted the achievements of each.

Sheriff Mike Tregre also addressed the assembly, touching upon the tensions being felt across the country because of COVID-19 and recent cases of police misconduct. Tregre said less than 10 jail inmates were tested for the virus and seven deputies tested positive. All have recovered.

Tregre said he is dismayed by the actions of some law enforcement officers around the country.

“We’re all talking about what is happening in this country with law enforcement and these officers who have really put law enforcement in a bad light,” Tregre said. “The George Floyd case comes to mind right off the bat. That was, no other way to put it, I think that was clear-cut murder. I would have arrested them that same day for malfeasance in office. Why it took that long, I have no idea. I don’t’ know how they do things in Minneapolis but, I know in St. John, they would have been arrested that day. My job is to do the best I can to make sure that doesn’t happen in St. John.”