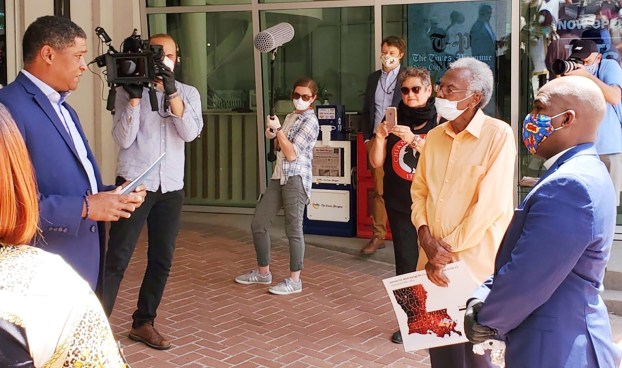 Could air pollution be a factor in COVID-19 fatality?

The Concerned Citizens of St. John, a vocal group with a mission to fight environmental inequity, is adamant that air pollution contributes to the disparity in COVID-19 impact. In an open letter to U.S. Representative Garret Graves (R-Louisiana), the Concerned Citizens of St. John and other New Orleans area environmental activists shared the findings of a new nationwide study conducted by scientists at Harvard University T.H. Chan School of Public Health.

The study reports that patients in areas with higher levels of fine particulate matter (PM 2.5) air pollution face higher COVID-19 mortality rates. At the time the letter was penned, the Harvard Study estimated that for every small unit increase in pollution, there is a 15 percent higher risk of COVID-19 mortality even after accounting for smoking, population density and other factors. As more information was collected, the study was updated on April 24 to pinpoint an 8 percent increased risk of mortality for every small unit increase in pollution, and this number is expected to fluctuate.

Dr. Terrell said the exact number is not as important as the overall implication of the study. She summed it up by saying, “A small increase in pollution leads to a significant increase in COVID-19 death risk.”

She explained that PM 2.5 refers to particles in the air that are 2.5 micrometers or smaller in diameter, or less than 1/30 the diameter of a human hair.

“Because they are so small, they can get deep within your lungs and into your blood stream,” Dr. Terrell said. “They are well known to cause lung problems, lung cancer, cardiovascular problems – That’s something we’ve known for quite a while through research all over the world. It’s long-term exposure to PM 2.5 that is most strongly linked to lung disease.”

Last week, L’OBSERVATEUR reached out to the Louisiana Department of Environmental Quality, the state agency that manages environmental protection to promote health, safety and welfare.

The state of Louisiana is in compliance with the national standards of PM 2.5, according to Press Secretary Gregory Langley.

“We do not go over the limit on any of that,” he said.

At this point, LDEQ has not received any information from the Louisiana Department of Health or the Environmental Protection Agency linking air quality to COVID-19 fatalities.

Langley added that the higher death rate of African American residents is a trend throughout Louisiana and is not specific to St. John the Baptist Parish.

The letter cited that St. John Parish has high rates of asthma, long-term complications from diabetes and cardiovascular death compared to state and national data. Those who signed the letter declared they would now rename Cancer Alley “Death Alley” to reflect the “abnormally high burden of air pollution related diseases.”

According to the Louisiana Department of Health, hypertension and diabetes are the underlying conditions most strongly linked to COVID-19 mortality.

The Concerned Citizens asked Graves for personal protective equipment, financial assistance and access to free medical care for those living in at-risk areas. They also asked for the government to suspend operations of all plants producing non-essential items and to install EPA-approved PM 2.5 monitors in every river parish from Plaquemines and Baton Rouge that does not currently have one.

Dr. Terrell said St. John and St. James parishes do not have a single PM 2.5 monitor. Data on air pollution levels is retrievable from satellites, but it does not give detailed information on neighborhood levels of air quality the way a PM 2.5 monitor could.

“I think there is a really urgent need for information about the levels of pollution people are being exposed to,” Dr. Terrell said, adding nobody chooses to expose themselves to pollution where they live. Sources of pollution tend to be in low-income areas in which people already face limited access to healthcare, she said.

In a letter dated April 23, 2020, Congressman Cedric Richmond stated he had reviewed an abundance of scientific research related to air pollution as a COVID-19 risk factor, including the Harvard Study.

He told members of the Coalition Against Death Valley, “…You are right about this. Preexisting conditions linked to air pollution, such as asthma, heart disease, or chronic obstructive pulmonary disease (COPD), clearly make the outcome worse if someone contracts COVID-19.”

Noting that the virus disproportionately affects African American communities, Richmond called on Congress to assemble a Select Committee specifically to investigate and fix the disparities linked to COVID-19 health outcomes. Richmond said he is working to finalize legislation to provide “protection and direct funding for communities around facilities.”

The Denka Performance Elastomer facility located in Reserve near Fifth Ward Elementary School has long been a source of controversy, as it is the only plant in the country that emits a chemical called chloroprene.

DPE instituted measures to significantly lower emissions in light of community concerns but has always maintained that there is no evidence chloroprene causes cancer or other ill health effects.

Additionally, Denka Performance Elastomer spokesperson Jim Harris said there is nothing suggesting the people of St. John Parish are dying from COVID-19 due to any industrial activity. He argued that higher rates of infection in St. John Parish and South Louisiana result from overall health, diet and lifestyle.

“Half of the people who have died in St. John lived in a nursing home over four miles away, in the direction the wind does not normally blow, that was struck early by the virus and represents the most vulnerable group of people the virus impacts,” Harris said. “That has skewed the statistics in St. John and can in no way be related to DPE.”

Roughly 1/3 of the deaths in the state have come from nursing homes and other adult residential care facilities, according to recent data from the Louisiana Department of Health.

Dr. Terrell said the Southeast Louisiana Veterans Home cluster is not the only cause for increased risk in St. John Parish.

“Even if St. John had half the deaths, it would still be more than twice the average death rate that the average Louisiana parishes are from COVID-19,” she said.

Harris added data showing higher African American death rates is not exclusive to the Mississippi River corridor in South Louisiana. He said it is reflected throughout the state and in other areas around the country, namely Michigan and Pennsylvania.

Furthermore, Harris said the Harvard study that suggests PM2.5 pollution is linked to COVID-19 mortality cannot be inclusive of chloroprene because chloroprene is not a PM2.5 pollutant. He added that PM2.5 pollutants are not specific to industrial corridors since they are found in smoke and naturally occurring dust.

“The study would suggest people in other areas of the country, like the crowded northeast U.S. or the Los Angeles area, to be subject to more PM 2.5 than South Louisiana,” Harris said.

While the letter to Congress cited DPE’s operations as non-essential, Harris maintained that DPE products are critical in the fight against COVID-19.

“Synthetic rubber is used to make medical exam gloves, respirator bags, bandages, adhesives and other supplies that first responders, healthcare professionals and everyday people need to stay safe,” Harris said. “Since the COVID-19 crisis began, one of our partners that makes anesthesia bags sold in Louisiana has increased their volume – using our products – by over 30 percent.”