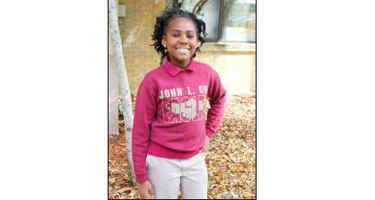 Jaz Thompson has a future that shines bright. Nominate the next Looks Bright student profile by emailing brooke.robichaux@lobservateur.com.

LAPLACE — Like most fifth graders, Jaz Thompson feels flutters of nervous energy in the minutes leading up to a performance in front of a large audience. But once she steps onto the stage, the fear dissipates, and she has total confidence in who she is — a young girl with a drive to change the world.
Jaz has won first place in her grade level in John L. Ory’s oratorical competition every year since kindergarten. Jaz is also this year’s spelling bee champion and a wonderful role model for her two younger brothers. The older of the two is only in second grade, but he’s already following in his big sister’s footsteps by winning school competitions.
The oratorical contest has become a tradition for Jaz. This year, she took the stage wearing a locket bracelet in honor of her MeMe, whom her family believes was surely smiling down from Heaven.
Just before reciting Langston Hughes’ poem, “Let America Be America Again,” Jaz asked first grade teacher Maria Zeledon if she could “step away from the microphone and engage the audience.”
Public speaking comes naturally to Jaz. She claims it runs in the family.
“Every single time I do the oratorical contest, I like to do political stuff,” Jaz said. “I feel like that’s my strength because, in my family, we really like to preach. My grandfather is a pastor. My mother is an evangelist and my father is a preacher. I think it’s been passed down to me.”
Jaz represents First Baptist Church in Vacherie and Antioch Baptist Church in Lutcher. Speaking her feelings is easy with poems she connects with.
“‘Let America Be America Again’ is a very strong and powerful poem,” Jaz said. “Langston Hughes is famous for making things that have to deal with equality in America. I chose this poem because I agree that America should be a better country than it is right now. It is our country and I am really proud to be part of it, but there are some ups and downs.”
Her favorite lines from the poem were, “Let America be America again. Let it be the dream it used to be. Let it be the pioneer on the plain seeking a home where he himself is free.”
Last year, she won first place reciting a poem called “For Peace Sake.” She still remembers most of the tribute to Harriet Tubman she recited as a first grader.
For the past four years, Jaz has attended an acting academy called “Launch Model & Talent. She’s also signed with an acting agency, and she’s beginning to get auditions and callbacks for acting projects.
“When I grow up, I want to be a mixture of an actor and a musician,” Jaz said. “I think acting is super fun because you get paid to do what you love. It’s the same for music.”
Jaz is well on her way to achieving those goals. At school, she is part of talented theater, talented music, gifted classes, choir and Beta Club. She’s learning how to play the piano and strengthening her singing voice with vocal exercises.
Her dream is to be casted in a comedy. For all her success thus far, Jaz credits her family.
“I have two brothers who I really love. I also have two awesome parents, Koi Thompson and James Thompson,” Jaz said. “I wouldn’t be here today if it weren’t for my family and all they have sacrificed for me.”
Koi Thompson said she is proud of every accomplishment her daughter has achieved. Jaz has blown away every expectation she had of motherhood, and she counts herself lucky to have self-motivated children.
“She’s a hard worker,” Thompson said. “She’s determined. She’s wise beyond her years. She’s really mature, and I’m so blessed that God lets me have a daughter like her. I was known to be an honor student and speak on different occasions, but she has totally superseded all of that. It’s kind of surreal sometimes.”
This year, little brother James Jr. also placed first for his grade level in oratorical and spelling bee contests.
“So far, he’s been winning first place as well,” Thompson said. “They are both into political views. One day, one of them might become president of the United States. They are always talking about changing the world.”