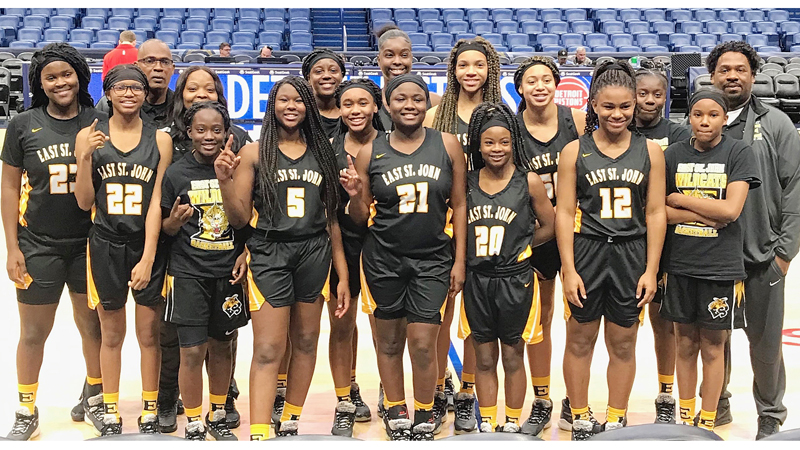 The East St. John Girls Basketball Team started the 2019-2020 season with a 5-1 record, despite having almost an entirely new roster. The team is performing well on the court and currently holds a 14-4 record.

With only two seniors and two sophomores returning, realistically, the Lady Wildcats were going to need a little time to develop and find their way on the basketball court this season.

But then a funny thing happened.

They won. Then they won again. And again.

The young, inexperienced, still learning Lady Wildcats rolled up a 5-1 record in the early days of the season. Now they are 14-4 as they head into the thick of the District 7-5A schedule. East St. John opened district play with a 41-39 win over Terrebonne on Dec. 17 and were preparing to face Thibodaux Friday night.

James said the team’s success has been somewhat surprising, given the youth of the team.

“I have a team full of ninth graders,” James said. “I would say I thought we would struggle. I didn’t think we would start off as well as we did. I thought it would have happened a little bit later, just because I had so many ninth graders I had to bring in and so many things I had to put in. The transition from eighth grade to high school is much different. I did have to put in a lot. I just thought it would take a little bit longer, but it didn’t take long at all actually.”

It helps to have talent, of course.

East St. John starts two seniors from last year’s squad, which finished 22-9 after a bi-district loss in the Class 5A playoffs. They are 6-foot-3 center Derriyon Daniels and 5-5 point guard Kayana Adams. They were freshmen in 2017 when the Lady Cats were in the semifinals. Adams is averaging 12 points and five rebounds per game, James said.

Then James got an influx of talent with her large group of freshmen, including 5-5 guard/forward Ashia Ward, Lia Anderson, a transfer from John Curtis, and 5-9 forward Jasmine Matthews, who has quickly become the team’s go-to player.

Ward and Anderson are averaging eight and seven points per game, respectively.

Matthews is averaging 19 points per game, five assists and 10 rebounds.

“She (Matthews) can play all five positions,” James said. “She is going to be our next big recruit out of here.”

Sophomore Alysha Soniat is also making an impact with seven points and five rebounds per game.

James said the Lady Cats will need its weapons to compete in a tough District 7-5A. Hahnville, last year’s co-champion with Thibodaux, was 10-3 in its first 13 games. Thibodaux was 9-6 as of Thursday. East St. John was dependent upon Kayja Jackson, who scored more than 1,000 points in her high school career and is now on the roster at Wiley College in Marshall, Texas.

“I think we are a much better team than we were last year,” James said. “We had Kayja last year and she put up a lot of points for us, but I had three freshman putting up some points last year. We were depending a lot on Kayja.”