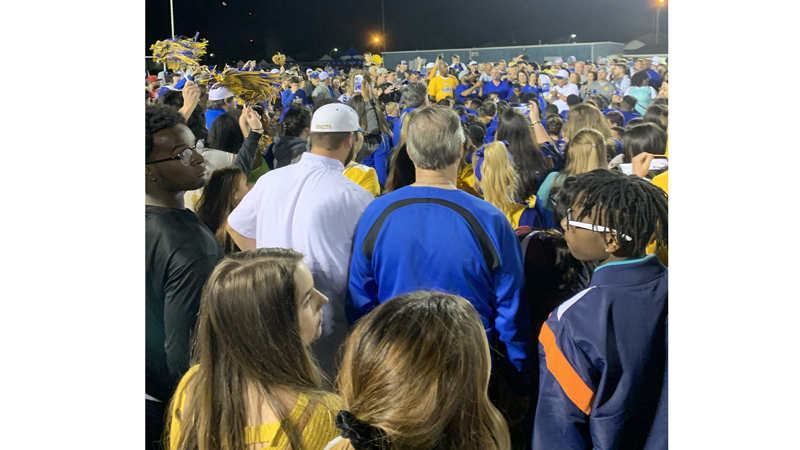 Fans show support for the Comets.

LAPLACE – The photo was a poignant one, shared thousands of times across social media platforms.

It showed a dad hugging a son to congratulate him on a job well done.

St. Charles Catholic Comets fans hoped the moment would be repeated the next night and were ready to capture the moment.

“I was very disappointed in the outcome,” Monica said after the game. “It’s not the way we wanted the seniors to go out. I’m disappointed for the fans and student body, but more disappointed for those 15 players. But there’s a lesson there somewhere. There always is a lesson from adversity and lessons from failure, and they have to understand that.”

It was not the ending the Comets and their fans hoped for, but some could have foreseen the outcome. Lafayette Christian has won the last two Division IV championships before moving up to Division III this season. The Knights, who finished 12-1, became only the 10th school in Louisiana high school history to win titles in three straight years.

St. Charles, which has reached at least the semifinals in each of the last six seasons, finished as a state runner-up for the fourth time – twice to John Curtis and once to Riverside. The Comets’ only football title came in 2011 over Amite.

This year’s team might not have been tapped as the most likely to win that second championship, but they sure made a good run, finishing 11-2.  That included a triple overtime win over De La Salle, last-second wins over Lutcher and Newman and a wild double overtime win over Catholic of New Iberia in the semifinals.

We’re not an explosive offense,” Monica said. “That hasn’t been our M.O. We’ve been lucky. There were so many tough moments. But this team has been resilient. There’s the old expression, the harder you work the luckier you get. I believe that a little bit.”

Maybe the Comets’ luck ran out. Or maybe they just ran into a juggernaut.  St. Charles’ offense never got across midfield in the first half and the Comets trailed 20-0.

There were some bright spots. Philip Tran helped where he could with a couple of long kick returns. Mandel Eugene blocked a punt. And sophomore Zack Vicknair provided a spark, scoring both of the Comets’ touchdowns in the second half.

This was Frank Monica’s 50th season in coaching, during which he became the winningest coach in the River Parishes. There are some who have said this might be his last, that 50 years is long enough, 71 years is too many. He quickly swiped down those rumors last week.

“I plan to continue as long as they’ll let me,” he said.

Nick Monica won his championship in his first year as a head coach. He’s only 39 years old. Can he imagine his son doing this for 50 years?