Through the eyes of the helpers: Volunteers make Thanksgiving luncheon a success 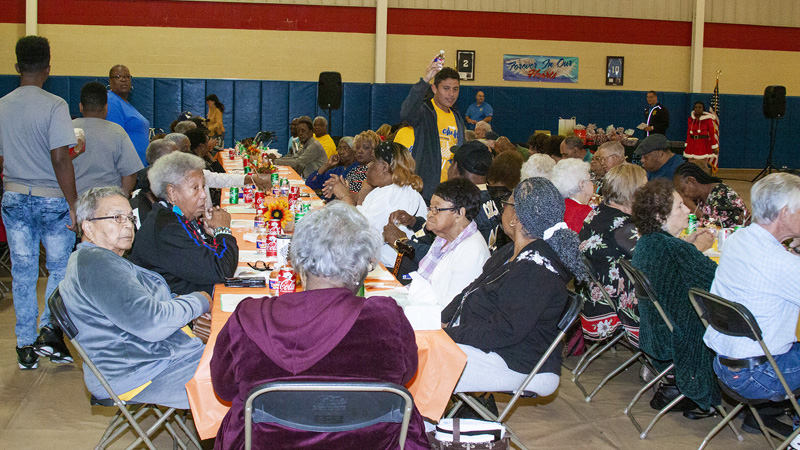 RESERVE — Sheriff Mike Tregre and his officers welcomed approximately 400 senior citizens to the annual Thanksgiving Luncheon in a massive undertaking of food, music and fun made possible by dedicated community volunteers.

The St. John Parish Sheriff’s Office coordinates the annual luncheon to unite the community and show appreciation to local seniors. That was also the goal of the Distinguished Gentlemen’s Club, a group of young men working with officers to become positive influences in the community.

Damon Meeker, 13, joined the Distinguished Gentlemen’s Club to better himself and help others. He enjoyed escorting seniors, serving food and drinks and assisting with bingo during Tuesday’s luncheon.

“It gives you a chance to meet people and help people,” Damon said during the luncheon. “You’re not having to sit around and do the same boring things over and over. You get to have fun while giving others things that they need and deserve.”

“Society, this parish and social media are giving us a bad name. We try to show them that we don’t live around our belts,” Duronslet said. “We are dads, we are husbands and we are fathers. We’re trying to give them something different. This is our way of giving back.”

Approximately 125 boys have participated in the Distinguished Gentleman’s Club since it was established three years ago, according to Duronslet. However, the young boys were not the only young people who stepped up to serve the elderly during the Thanksgiving Luncheon.

A’Zirea Alexander, A’Kyri Paulding, Maria Lopez and Neveah Cox were among the East St. John High School Interact Club members who served the community over Thanksgiving Break. The girls said they were thankful for family, opportunity and a growing Interact Club that is thriving with new members.

“I like giving back to the community,” Paulding said. “Interact is about service above self. We always put others before us, and it’s always good to give back. We don’t look for anything in return.”

Alexander said it’s important to show seniors that there are young people here to help them. Lopez said the Thanksgiving Luncheon is especially precious to seniors who do not have family keeping them company during the holidays. She was happy to be a part of the special day. Cox is a new Interact Club inductee, and she immensely enjoyed assisting the St. John Pastor’s Coalition last week in a massive Thanksgiving dinner and turkey drive.

Other Interact Club members enjoy assisting with bingo and singing Christmas carols to residents at the Southeast Louisiana Veterans Home in Reserve.

Parish President Natalie Robottom was one of many volunteers to represent the River Parishes Alumnae Chapter of the Delta Sigma Theta Sorority during the luncheon.

The Zeta Phi Beta alumni chapter was founded in the River Parishes in 2005. The local chapter has participated in the Thanksgiving Luncheon for 10 years, starting from the time it was hosted at East St. John Elementary School, according to president Gwendolyn F. Darensburg.

Belinda W. Rodgers, Freida Howard, Lynette Recasner and Janice Brown were happy to represent Zeta Phi Beta while serving the seniors this week. Members agree that seeing smiles, hearing “thank you” and watching the crowd grow year-by-year make every second worth it. For the past six years, the group has donated Walmart gift cards to the Thanksgiving raffle.

To fulfill a mission of helping seniors, Zeta Phi Beta hosts its own annual Christmas dinner with the local Council on Aging. The chapter additionally hosted a Veterans program that included music and heartfelt gifts.