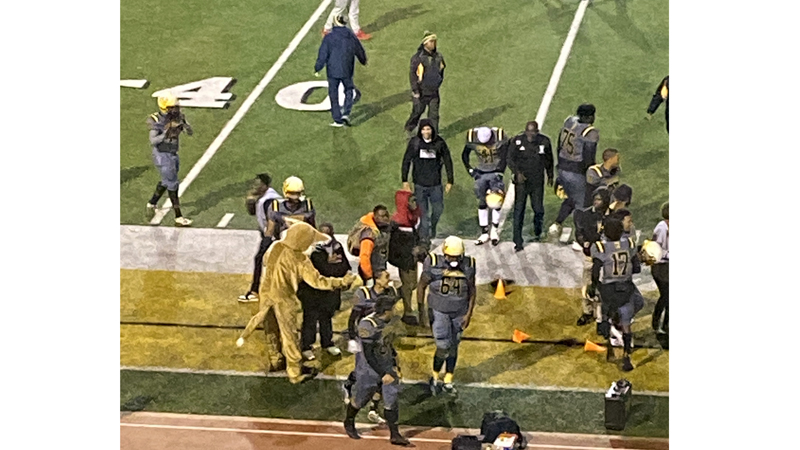 Alex Reyes and the Wildcats are pictured leaving the field after their latest win Friday night.

Long after the fans, band, cheerleaders and the Terrebonne Tigers had left, Brown was still grappling with what he had just witnessed.

With eight seconds remaining and his team trailing 13-12, Brown called a timeout. His quarterback, Sean Shelby, had tried valiantly, but was unable to get the ball to a receiver in the end zone. Six straight incompletions he had thrown, but the Wildcats kept getting second life thanks to two pass interference calls on the Tigers.

The Wildcats had one shot left and a decision to make. Should they let Shelby throw one more time to the end zone? Should they let kicker Alex Reyes attempt a 27-yard field goal? Or should they call a trick play and fake?

St. Charles Catholic has clinched a share of the District 11-2A bracket.

Shelby had the answer.

“We talked about running the fake,” Brown said. “But our quarterback, Sean Shelby, came in the huddle and said, ‘Coach, let’s kick it. Alex is going to make it.’ And that’s what we did.”

Reyes did make it – the game-winning field goal as time expired to give the Wildcats a 15-12 win and set off a raucous celebration that even included the mascot swarming Reyes on the field.

“It was unbelievable,” Brown said. “Our guys just believe in each other.”

It was a statement win for the Wildcats, who improved to 7-2, 4-1 on the season. But more than that, it keeps East St. John very much alive in the District 7-5A title race heading into the final week of the season. The Wildcats also are looking to post their best record since 2013, when they finished 7-2. Just four years ago the team was 2-8 and out of the playoffs.

The Rams are projected as the No. 1 seed in the Class 1A bracket. Photo by Aneka Moll.

“Our goal is to be playing in December,” Brown said.

But winning a district championship would be nice, too, and it’s not impossible.

Of course, district championships don’t mean much anymore since the Louisiana High School Athletic Association went to its power ranking system based on wins and losses and strength of schedule. Entering Week 10 all eight schools in the River Parishes will make the playoffs for the fourth year in a row. East St. John is currently at No. 14 in the Class 5A bracket, well within the parameters for a playoff spot.

West St. John has already clinched its share of the District 9-1A championship as they head into the season finale against St. Martin’s.  Not only that, the Rams are projected as the No. 1 seed in the Class 1A bracket. The winner between Country Day and Riverside would pull into a tie for the championship if St. Martin’s beats West St. John. As for power points, Riverside is sitting at No. 14 in the 16-team select school field, while St. Martin’s is out at 21. Country Day is No. 7.

St. Charles Catholic has clinched a share of the District 11-2A bracket with victories over Newman and South Plaquemines. The Comets close the season with Cohen. Just as in the 1A district, St. Charles could be forced to share its title with the Country Day-Newman winner if it loses to Cohen. The Comets are No. 3 in the power rankings.

Riverside is sitting at No. 14 in the 16-team select school field.