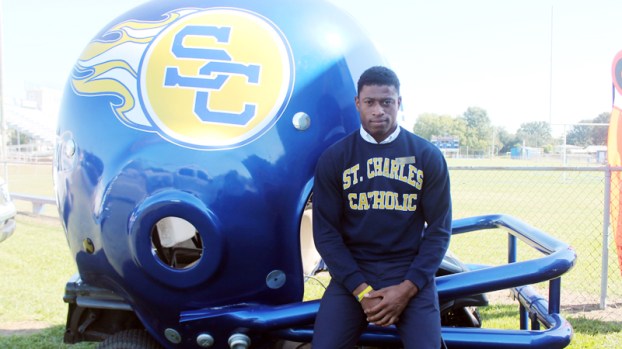 Mandel Eugene Jr. is a 6-foot-1, 190-pound junior middle linebacker for St. Charles Catholic. He is the son of Mandel Eugene Sr., a former workhorse running back for the East St. John Wildcats.

LAPLACE – Somewhere in his room, Mandel Eugene keeps a beat up old folder of newspaper clippings.

He takes it out every once in a while to read the stories about a high school player who bore the same name, but played a different position at a different River Parishes school.

That Mandel Eugene was the workhorse running back for the East St. John Wildcats, and the stories tell how he averaged 27.5 yards per game and gained more than 1,000 yards before Halloween in 1991. In one game, he rushed for 219 yards and four touchdowns on 36 carries. “Durable,” his coach called him. At the start of the 1992 season, Mandel Sr. was the lone player on the cover of The Times-Picayune’s football preview section. He was sitting on the crossbar of the goalpost at Joe Keller Stadium.

Mandel Eugene Jr. has seen that photo. Mandel Jr. is a 6-foot-1, 190-pound junior middle linebacker for the St. Charles Catholic Comets. His outstanding play not only has helped his team get off to a great start at 4-0, but also is getting him some serious attention from college coaches. Mandel Jr. already has an offer from Tulane.

“He probably will be the next D1 guy we have here,” St. Charles coach Frank Monica said. “He never takes a lazy step on the field. He works out beyond what is expected of him, and he’s a leader on the field. He’s not afraid to correct another player. He’s a sideline-to-sideline guy. He’s got the speed where, if he makes a mistake on his read, he’s got the speed to make up for it.”

Last Friday, Mandel Jr. had six tackles and a fumble return for a touchdown against E.D. White. It was the first game of the season to take place at home in St. Charles Catholic’s new stadium.

On Sept. 20, Mandel Jr. got his own chance to shine on his dad’s old field when the Comets’ game against De La Salle was moved to Joe Keller Stadium. The PA announcer that night called his name nearly as many times as his dad’s was called in the 1990s as St. Charles outlasted De La Salle, 26-23, in three overtimes. Mandel Jr. finished with 12 tackles, two sacks, a forced fumble and a recovered fumble.

Dad said the night was surreal.

“Listening to them call his name in my old stadium, it kind of brought tears to my eyes,” Mandel Sr. said. “I can’t even explain it, how it felt.”

Mandel Jr. said he grew up knowing his dad was once a big deal in River Parishes football lore. Besides reading the clippings, he has listened to the things his dad has told him about his playing days.

“He tells me how it was growing up as an athlete, the things he did,” Mandel Jr. said. “He tells me about the ways he messed up so I won’t make the same mistakes. That’s what we talk about. He told me a lot of stories. He mainly talks to me about staying humble and working.”

Mandel Sr., who works construction these days, said he gave that old folder of clippings to his son when he realized that he had passed a couple of things on to his only child – not just his good looks, but also his size and his athletic ability. The difference is, Senior didn’t always take care of his business. He never got to go to college to play football.

“I just talk to him a lot and tell him to bring it to another level, something I should have did,” Mandel Sr. said. “But I tell him he has to play football for himself. He can’t play because I played it. He has to have a love for the game.”

There seem to be no worries there.

“I try to make my own legacy,” Mandel Jr. said. “I feel like I’m doing something my dad did and, it’s like a blessing. I feel like I could go further than he did but I can bring him with me.”

After week 4 of local high school football play, these are the game results for all eight of the River... read more