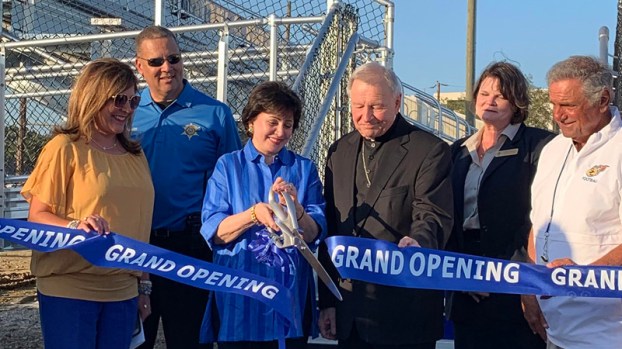 LAPLACE — Friday night’s football game against E.D. White was a special milestone for the St. Charles Catholic Comets, coinciding with the blessing and dedication of the new $540,000 Thomas J. Dupuy Stadium.

SCC’s original stadium was part of the last remaining remnants of the upper deck of the famous Tulane/ Sugar Bowl stadium, according to St. Charles Catholic Advisory board president Louis Authement. Before its demolition in 1979, four years after the introduction of the Super Dome, the Sugar Bowl Stadium was the birthplace of the New Orleans Saints in 1967.

“At its glory, that original stadium hosted three of the first nine super bowls and put the city of New Orleans on the NFL’s map,” Authement said, detailing how the remnants of the stadium later became part of the St. Charles Catholic community.

“Our dads literally welded the pieces together, and our football players on Saturdays were bused to New Orleans to the demolition site to take down benches so our fans would have a place to sit to piece together what has been for 40 years our handed down home-side stadium,” Authement said.

After another four decades, the resilient upper deck was recently demolished. A sole surviving piece of the upper deck was gifted to special guest Gayle Benson, owner of the New Orleans Saints and wife of the late Tom Benson, during Friday’s dedication.

Over the years, that piece has been there for generations of Comets football players, cheerleaders, dance team members and band members. During that time, the Comets have qualified for the state playoffs 17 consecutive years under the guidance of Hall of Fame head coach Frank Monica.

Funding for the new stadium was made possible by generous donations from the New Orleans Saints, the NFL Foundation and the Local Initiatives Support Corporation, in addition to donations from friends, parents and alumni.

“Because of every single one of you, for every dollar that you donated, we now have for the first time in 71 years our new stadium,” Authement said. “Mark this moment in your memory as proof of what a community can do when it is grounded and rooted in faith.”

“I am motivated to teach young kids fundamentals while instilling discipline and accountability which ultimately creates one’s work ethic,” Monica said. “I hope students walk away from SCC with a wholesome experience in an environment of enthusiasm.”

LAPLACE – The St. Charles Comet fans will definitely be putting off their manicures for a while following the last... read more