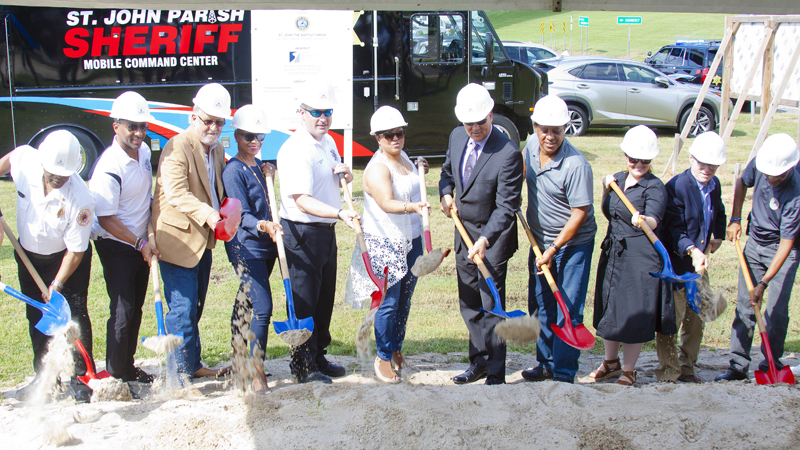 Representatives from the St. John Parish administration, the Sheriff’s Office and the Office of Fire Services were pleased to break ground on the West Bank Public Safety Complex, anticipated to reach completion in 2020.

Located on top of the Mississippi River levee in Lucy, phase I of the Multi-Use Trail will consist of an asphalt path spanning from East 12th Street to Terry Court. The end result will be similar to the East Bank bike path, according to parish officials.

When the project moves to Phase II, the recreational trail will extend to Edgard, according to Parish President Natalie Robottom.

“We are about to complete the trail on the East Bank so it was only fitting that we would work hard to obtain funding to extend the trail to the West Bank,” Robottom said. “This project promotes healthier lifestyles for residents and will allow those who live and visit here to use it for walking, touring or biking. Although it is incumbent upon future administration to complete the trail on the West Bank, I’m glad I was able to get it started.”

After the Lucy groundbreaking, the party moved to the grounds of the Wallace Fire Station, near the Veterans Memorial Bridge. Another groundbreaking was held to commemorate the beginning of construction on the West Bank Public Safety Complex.

The 6,000 square foot, $2 million complex is a joint venture between the St. John Sheriff’s Office and the St. John Office of Fire Services to increase police, fire and medical presence on the West Bank.

According to Robottom, the structure will feature bays for housing trucks and equipment, meeting space, an office, sleep quarters, a common reception area, a day room, a kitchen, restrooms and a break area. There will also be covered parking for Acadian Ambulance Services, a bay for voting, a walkway to the nearby park and backup generator power.

Robottom said the project, expected to reach completion in the first half of 2020, is an example of true collaboration.

“This building will be first-class with a goal of providing safe additional space for responders to work from the West Bank, but also a safe place for our residents to use,” Robottom said. “This facility belongs to the community and we want them to know they are welcome as well.”

Tregre said the St. John Sheriff’s Office has been severely limited in space on the West Bank for many years, and talk of a new complex has circulated since Hurricane Isaac damaged pre-existing structures.

The trials of acquiring property ownership and the lengthy process of getting the go-ahead to begin construction were well worth it, according to Tregre. He believes the complex can stimulate economic growth on the West Bank and provide a vital shelter in place location for the community.

Dufrene said the West Bank Safety Complex represents “a great use of taxpayer dollars” by combining the needs of SJSO and the Office of Fire Services into one location.