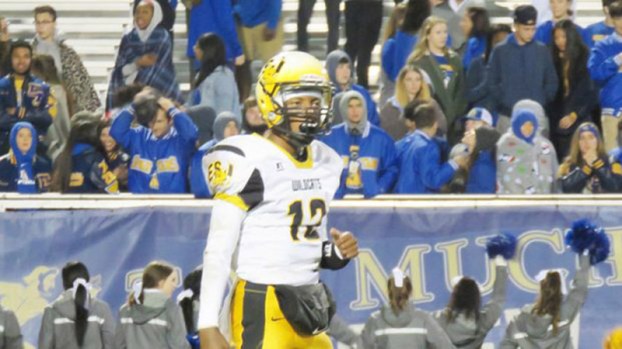 East St. John quarterback Sean Shelby redeemed what he considered to be a sub-par performance two weeks ago against St. James with six touchdown passes in Friday’s victory over Sophie B. Wright.

How could he not?

The senior signal-caller for the Wildcats threw an astounding six touchdown passes in Friday afternoon’s 57-9 victory over Sophie B. Wright – well, seven if you count that one option pitch that went for a score.

And he might have had eight, had he not underthrown one just a bit.

“I just told coach I didn’t want to stop scoring,” said Shelby, who finished the day 15 of 30 for 329 yards. “I just made the right reads. That’s how I got six touchdowns. I felt like I could have got more.”

While remarkable, Shelby’s performance didn’t break any records. According to the National High School Federation website, the record for most touchdown passes in a game is 15, set by a Nebraska quarterback in 1921. Several players since then have thrown 10 and several more have thrown nine. The web site did not show a Louisiana record for touchdown passes thrown in a single game.

Shelby wasn’t really interested in breaking any records, anyway. He was more determined to redeem himself after what he considered to be a sub-par performance two Fridays ago against St. James, resulting in a 30-13 loss. Shelby was 10 of 33 for 150 yards with one touchdown and an interception in that game.

Sean Shelby said he made the right reads during Friday’s game against Sophie B. Wright. He’s quarterback for the Wildcats and a fierce competitor on the team, according to Coach Brandon Brown.

“This game was on my mind a lot because, I felt I could have performed better against St. James,” he said. “I just find we weren’t focused that much on the game. We didn’t play that good. We had to shake it off and get ready for the next week.”

The Wildcats, now 2-1, had to get ready for Sophie B. Wright, a team that has now lost three games in a row while being outscored 152-47.

That is not to say that Shelby and his teammates took the Warriors lightly. They have learned from lessons in the past, he said.

“We saw that last year with the H.L. Bourgeois game,” he said. “We took them lightly. I felt like they didn’t really stop me; I stopped myself.”

The result was a 7-6 loss to Bourgeois in a mud fest at Tom B. Smith Stadium in Houma, a game which, in part, helped Terrebonne Parish officials decide to turf the field that Bourgeois and Terrebonne share. Photos showed players on the sideline in ankle deep mud, their white jerseys virtually unreadable.

Now, exactly one year later, Brown feels like his team has a chance to get some redemption against the visiting Braves, who come to Joe Keller Stadium Friday with a record of 1-2. After being held to one touchdown in losses to South Terrebonne and E.D. White, the Braves defeated Ellender 46-42 last week. Brown also hopes his team stays focused through the week of homecoming activities.

“There are a lot of distractions,” he said. “We need to stay focused on H.L. Bourgeois and what we need to do.”