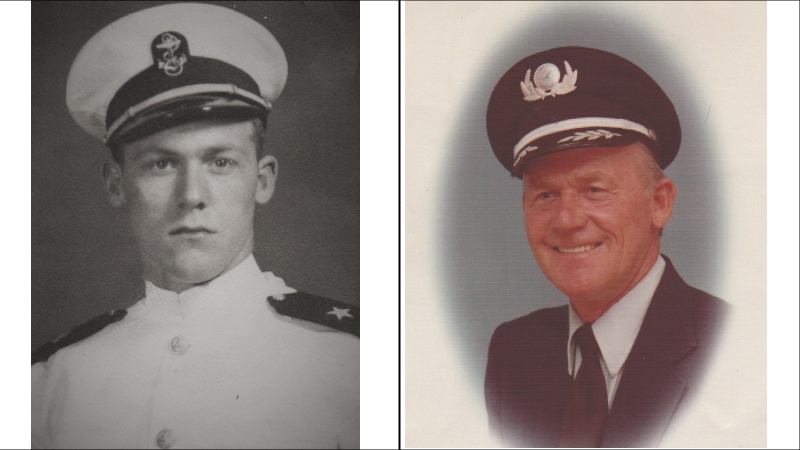 Funeral services for Mr. Thurman Eugene “Gene” Thornton, age 95 of Ruston, LA will be held at 10:00 AM Monday September 23, 2019 at the Episcopal Church of the Redeemer in Ruston. The Reverend Robert Dandridge will officiate the service. Burial will follow in Forest Lawn Cemetery in Ruston under the direction of Owens Memorial Chapel Funeral Home. Gene was born on May 9, 1924 in Horatio, Arkansas to Lloyd Pierce Thornton and Gertie Bell Baker. He passed away on Saturday September 14, 2019 in San Antonio, Texas under the loving care of his family and Precious Moments Assisted Living Center.

Gene started out life as a “barefoot farm boy” growing up in various areas of Texas and Oklahoma where he met the love of his life, Norma Jean Thompson. He eventually become a proud, successful commercial airline pilot, a profession he loved so much he often said he would have done for nothing for the sheer fun of flying. Gene experienced many adventures such as his time in the Civilian Conservation Corps during the Great Depression. He was proud of the many parks and monuments upon which he left his imprint. From high school he joined the U.S. Navy during World War II where he was introduced to the world of flying, eventually becoming an instructor by the end of the war. After the war, Gene was an instructor pilot for the Air Force out of Bainbridge AFB, Georgia, a period of his life from which he drew many fond memories and had entertaining stories to tell, tales which always captured the attention of family and friends. He was an Army helicopter instructor at Fort Walters in Mineral Wells, Texas. Gene entered the commercial airline profession flying out of New Orleans, Louisiana; he lived in La Place, Louisiana from 1964-1980 where he made many lifelong friends before moving to Ruston. He started his commercial career flying co-pilot in McDonnell Douglas DC-3 and Martin 404 multi-engine aircrafts eventually graduating to Captain flying the McDonell Douglas DC-9 series jet aircraft. He consummated his career in May of 1984 at the mandatory retirement age of 60.

During his time in LaPlace, Gene was an active member of Riverlands Country Club and the Cypress Country Bass Masters enjoying two of his most favorite pass times, golfing and fishing. Not far behind his love for golf and fishing was his love for the swamps and bayous of south Louisiana like duck hunting on the Reserve Prairie, Black Bayou and the Manchac preserve. He practically lived on Reserve Canal, 51 Canal and Lac Des Allemands in search of bass, bream and sac-a-lait when he was not in an airplane. He had many and varied interests which he pursued more aggressively upon retirement such as traveling with friends, bowling, duck hunting, singing, playing guitar and harmonica, playing bridge and poker, vegetable gardening, and participating in senior Olympics competition. The original “Mr. FixIt”, Gene could repair almost anything with duct tape, bailing wire and a hot glue gun as evidenced by his fishing and golf equipment.

Mr. Thornton is survived by his daughter Carolyn Jean and husband Robert J. Millet of Helotes, Texas; two grandchildren: Laura Anne and husband James Holcomb of Friendswood, Texas and Robert J. Millet, Jr. of Kerrville, Texas; and three great grandchildren Riley Grace, Justin Bryce and Brenna Faith Holcomb. He has one surviving sibling, Mrs. Sylvia Thornton Robertson, age 98 of Marshall, Oklahoma. Mr. Thornton was preceded in death by his wife of 70 years, Norma Jean Thornton and son Larry Stephen Thornton; his parents; brothers Lester Leon and Walter Elvie Thornton; and half-brothers Claude and Ernest Petty. Visitation will be held from 9:00 to 10:00 AM on Monday September 23, 2019 in Haskell Hall next to Church of the Redeemer chapel in Ruston