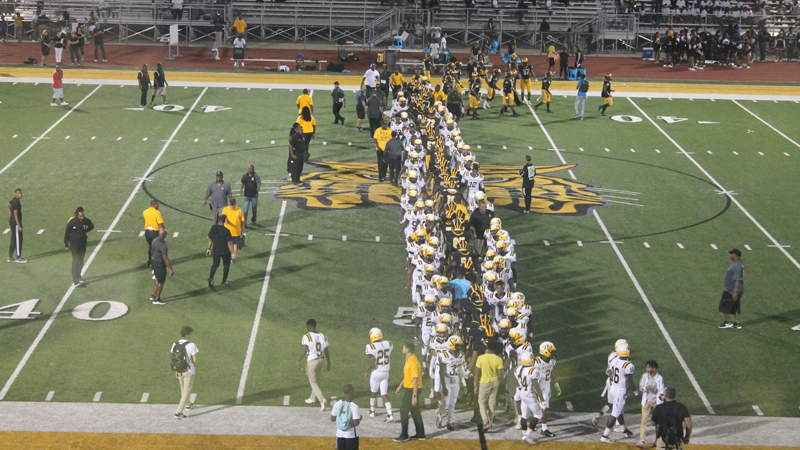 Unlike some River Parishes neighboring teams, there really is no long history between East St. John and St. James. The two sets of Wildcats have only played each other a dozen times and had not met since 2001, when East St. John took an unremarkable 6-0 win.

Friday night’s game was no classic either.

St. James took advantage of a slew of East St. John miscues, especially in the first half to take a 30-13 victory  before a completely black and gold crowd in Vacherie.

There was plenty of gold (as in flags) on the field as well.  East St. John was penalized 12 times for 90 yards. St. James had only three flags for 45 yards.

St. James quarterback Shamar Smith completed 15 of 22 passes for 123 yards and one touchdowns. He also rushed for 104 yards and three scores. Logan Gravois was on the receiving end of a 23-yard pass from Smith.

ESJ quarterback Sean Shelby was 10 of 32 for 150 yards and one touchdown to Markel August. The ESJ Wildcats were held to 72 yards rushing.

On their opening drive, the visiting Wildcats went backwards from the 20 before ESJ quarterback Sean Shelby connected with Alonzo Porter on a screen pass for a nice gain, but Porter lost the ball at his own 36. Savion Jones recovered for St. James and, from there, St. James needed only nine plays and 3:38 to score. Smith kept for a 3-yard score with 7:09 remaining in the first quarter. Alec Mahler’s PAT put St. James ahead 7-0.

East St. John had no better luck on the next drive, fumbling at its own 40-yard line with De Andre Keller recovering for St. James, but it could not capitalize.

St. James wouldn’t score again until the second quarter, again following an East St. John turnover – this one an interception by Keshawn Coleman at the East St. John 46-yard line with 9:29 remaining in the first half. Smith found a couple of receivers for short gains, but got his team into real scoring position with a 34-yard run to the East St. John 11. On the next play, Smith connected with Shazz Preston for the score. Coach Robert Valdez elected to go for the 2-point conversion – a pass from Smith to Lamon Lewis – to give St. James a 17-0 lead with 6:59 remaining in the half.

St. James got another 2 points when the Wildcats next punt rolled out the back of the end zone for a St. James safety.

After receiving the kick, St. James started its next drive for the first time in their own territory, but still put together a 6-play drive. After a personal foul penalty gave St. James the ball at the East St. John 23, Smith connected with Logan Gravois for the touchdown. The PAT failed, leaving St. James with a 23-0 lead.

East St. John finally got a break after when Rydell Jackson returned the ensuing kick to the St. James 27-yard line. On the first play from scrimmage, Shelby found Markel August for the touchdown.

St. James added a score in the third quarter, putting together a 9-play, 77 yard drive capped by Smith’s 2-yard run with 8:41 remaining in the period.

East St. John added  a touchdown late in the game, with Shelby connecting with Rydell Jackson for a 12-yard touchdown. The PAT was no good. The final score St. James, 30, Eest St. John, 13.