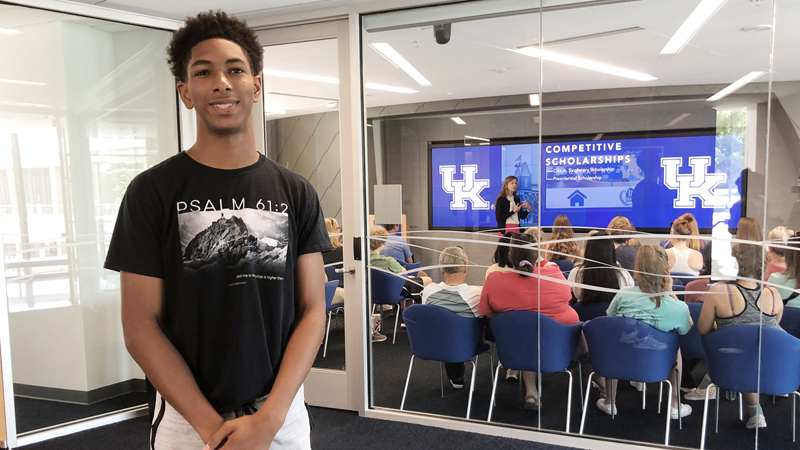 Over the summer, Riverside Academy junior De’Juan Daniel participated in a Finance and Accounting Success Track program at the University of Kentucky. He was the only student from Louisiana to attend.

RESERVE — Since the seventh grade, Riverside Academy junior De’Juan Daniel Jr. has held steadfast to his goal of attending the University of Kentucky, one of the most prestigious basketball schools in the country.

This summer, he was the only student from Louisiana to travel to the University of Kentucky for a four-day adventure in the world of finance, business and accounting.

During the July Finance and Accounting Success Track program (FASTrack), Daniel participated in bank visits, professional roundtables and networking with business professionals. By the end of the trip, Daniel had a renewed determination to return to campus two years from now as a student.

“I enjoyed it,” Daniel said. “Not only did I learn a lot, but I also met so many great people and so many smart people. It’s more than I imagined. My goal is to get to Kentucky for basketball. I’ll try as much as humanly possible to get there. I’m willing to put in the work.”

De’Juan Daniel Jr. stands with his father, De’Juan Daniel Sr., during Riverside Academy’s ring ceremony. De’Juan Jr.’s father introduced him to basketball at an early age and has coached him throughout the years.

The basketball bug seems contagious in Daniel’s family. His father and uncle both had a love for the game, and Daniel has been taking shots since he was 4 or 5 years old.

De’Juan Daniel Sr. has enjoyed watching his son grow into a respectable young man who shares his passion for sports.

“What makes me proud of my son his ambition to succeed in life, his faith in God, and that fact that he gives his best in everything he does,” Daniel said. “He has a lot of challenges and overcomes each one with a positive attitude. He’s such a humble and caring young man. I am so thankful that God blessed me with such a talented son. I knew the day I put that basketball in his hands he was destined for greatness.”

De’Juan Daniels is an all-metro basketball player at Riverside Academy and vice president of the Fellowship of Christian Athletes. He hopes to take his talent to the University of Kentucky after graduation.

Last season, Daniel was an all-metro player and the recipient of the “most improved” award.

“I’ve played with so many awesome guys,” Daniel said, referencing 2018 Riverside Academy graduate Jared Butler as someone he felt honored to play alongside. “When he was here, he was one of the top guys in the state. I saw what it was like to play with top players,” Daniel said. “The game is so relaxing. It’s something I love doing, and I can do that all day. It gives me freedom.”

Daniel knows where he wants to go in the future, but sometimes the road ahead seems daunting. During those times, Daniel’s mother, Shalinda Austin, reminds him he’s a perfect fit for the school because it’s not about what you know, but about what you are willing to open yourself up to learn.

She said her son’s demeanor isn’t what you would expect from a typical teenage boy. Daniel is humble, never boastful, and he’s learned at a young age how to follow his instincts instead of following the crowd.

He’s an independent thinker and a doting older brother who sees to it that his 12 and 13-year-old sisters always make it to school and church.

“De’Juan made a decision to open himself up to a higher level of influence and for that alone, I’m one proud mother,” Austin said. “He deserves every good thing that comes his way.”

De’Juan Daniel Jr. is inspired by his sisters, Imari and Imani Daniel, and his mother, Shalinda Austin.

Faith is a vital part of Daniel’s life. He was inspired to start his own Wednesday night youth group at PJ’s Coffee of LaPlace.

On Thursday mornings, he helps lead Riverside Academy’s Fellowship of Christian Athletes as elected vice president. He was voted most faithful member of the group, which unites students through the belief that God’s grace can make a great impact in everyday life.

In the future, Daniel could imagine himself working in the business office of a church.

Daniel also enjoys competing on Riverside Academy’s track team, where he contends in the 400m, 800m, triple jump and high jump. He advanced to the Class 2A track and field championship in Spring 2019, where he placed second in the high jump. Additionally, Daniel received the track and field coach’s award and was named overall MVP.

In the classroom, Daniel was named an outstanding student in family and consumer science and hardest worker in English III, chemistry and personal finance.

“You always want to work hard in anything you do,” Daniel said. “I’m trying to set an example for my sisters as well to work hard. Whatever you do, someone is always watching.”

Sisters Imari and Imani Daniel are among his greatest motivations. His mother is another inspiration.

“All I can do is thank her because she’s done everything for us,” Daniel said. “She kept going, even when it looked like we couldn’t make it. We couldn’t make it to private school and now here we are. I thank God for putting her in my life. I couldn’t ask for a better role model than my mother.”