Football is back: Jamboree sets the stage for week 1 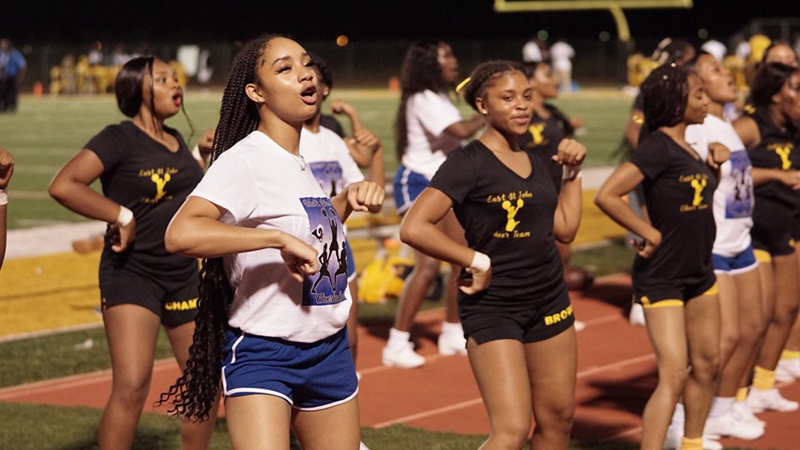 Both West and East St. John cheerleading squads combine for a group cheer during the Jamboree.

EDGARD – Friday night was the unofficial start to the 2019 football season and all indicators are it’s going to be a good one for St. John the Baptist Parish football fans.

East St. John High, Riverside Academy and St. Charles Catholic recorded jamboree victories over the weekend. Only West St. John did not, but that’s because it lost to East St. John.

The “real” season begins Friday with a full slate of games, including the traditional River Parishes season opener between St. James and West St. John.

A catch ready to be run back during the ESJ win over WSJ.

East St. John and West St. John had not played each other in football since a 2014 jamboree, but they took on each other Thursday night in Vacherie.

East St. John, looking to improve in its second season under Coach Brandon Brown, spotted West St. John a fumble and a touchdown before rolling up 47 points. The Wildcats scored on seven of eight possessions.

Wide receiver  Rydell Jackson had touchdown catches of 36 and 50 yards from Sean Shelby. He also scored on a 21-yard run and set up another score with a kickoff return. Calvin Gardner scored a pair of rushing touchdowns.

Brown said there were no surprises, though.

“We know where our guys were,” he said. “We wanted to see them in real game action. That’s what jamborees are for. We have a lot of work to do.”

The Wildcats open at home against West Jefferson, which lost to Live Oak, 28-19, in jamboree action.

Brown again asks for St. John community support to “Back Up Airline.”

The Rebels are another team looking to improve in the second year under a new coach. They got off to a good start with a solid 33-6 jamboree win over South Plaquemines.

“I thought we improved from the scrimmage, so that’s a good thing,” Coach Kevin Dizer said. “We still  left a lot out there, but I thought it was good. We’re certainly going to have to improve this week.”

The Rebels will face a tough challenge this week at Thibodaux, a Class 5A opponent in a hostile environment. The Tigers defeated Ellender 38-0 in their jamboree and have returned several key players who missed 2018 with injuries.

“Thibodaux is as explosive at team on offense as I’ve seen,” Dizer said. “The defense has got their work cut out for them and our offense is going to have to be ready in case we get into a shootout with them.”

Comets coach Frank Monica joked to one media outlet last week that he was concerned his team wouldn’t be able to break through the paper banner before the game.

They did more than that, dismantling a very good Country Day team, 23-7, and handling one of the best players in the metro area.

Quarterback Justin Dumas was 4 of 6 for 57 yards passing and rushed for 76 yards. Phillip Tran rushed for 54 yards and a touchdown; Keenan Gauff rushed for 49 yards and another score.

St. Charles will take the long trek to South Lafourche Friday night for its season opener. The Tarpons edged H.L. Bourgeois 20-14, scoring on an interception return on the final play of the game.

Though West has a long history of playoff participation, East is coming on strong.

Some teams like to build up to the Big Game. West St. John likes to start with it.

The Rams will host the Railroad Classic, the traditional season opener against St. James Friday night in Edgard. It’s the 24th meeting of the teams (two have been hurricaned out), and St. James has won the last three.

West St. John had a tough night against its cross-river rival on Thursday. The Rams’ lone touchdown came after recovering a fumbled snap on the second play of the game. D’Andre Gaudia then threw a 44-yard touchdown to Kaejean Kendrick. But after that it was all East St. John.

St. James is coming off a 26-3 win over Vandebilt Catholic.

West and East meet in Jamboree play for the first time since 2014.