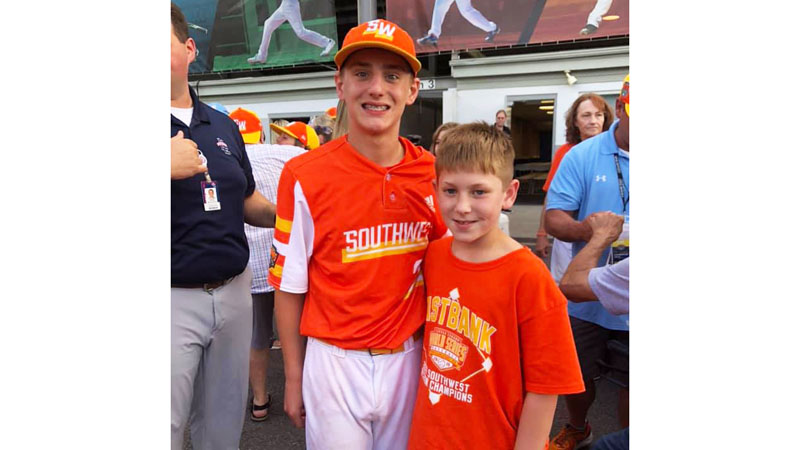 Reece Roussel put up phenomenal numbers in the World Series, helping to lead his team to victory.

But the team has some strong ties to the River Parishes as well.

As probably indicated by the ubiquitous last names on America’s TV screens, two of the players on the Southwest Roster can be called River Parishes boys.

Marshall Loque gets the job done on the pitcher’s mound.

Reece Roussel, who was one of the biggest heroes of the Series, lives in Destrehan with his parents Corey and Brandy Roussel. Dad Corey, originally from Reserve, attended St. Charles Catholic High School in LaPlace, where he was the Comets’ quarterback and a member of the baseball team.

Reece’s grandparents are Bonnie Vicknair of Lutcher, Camille Roussel and Nancy Frietas, both of Reserve.

The St. Charles Borromeo student hit a whopping .739 in the series, with 10 RBIs and 10 runs scores, and he hit a grand slam in the championship game against Virginia. He also set a new record for hits in the series with 17.

Louque, who set the record for doubles in a Series with seven, is the son of Carmen and Fabian Louque of Lutcher. His grandparents are Becky Foret of Lutcher, Mike Roussel, Kathy Roussel, Kevin Louque and Judy Louque, all of Paulina.

The Eastbank Little League team became the first team from Louisiana to win a World Series title in the 73 years the series has been played, making them the best of 7,700 teams that started tournament play.

The team has been invited to the Governor’s Mansion and the White House, but first, they were greeted with a second line at Armstrong Airport on Monday, followed by several of proclamations from government officials.  A parade will be held at 11 a.m. Saturday in Metairie.

In an interview with VSN.com  at the Monday welcome reception, Reece has a chance to discuss his sudden emergence into the international spotlight.