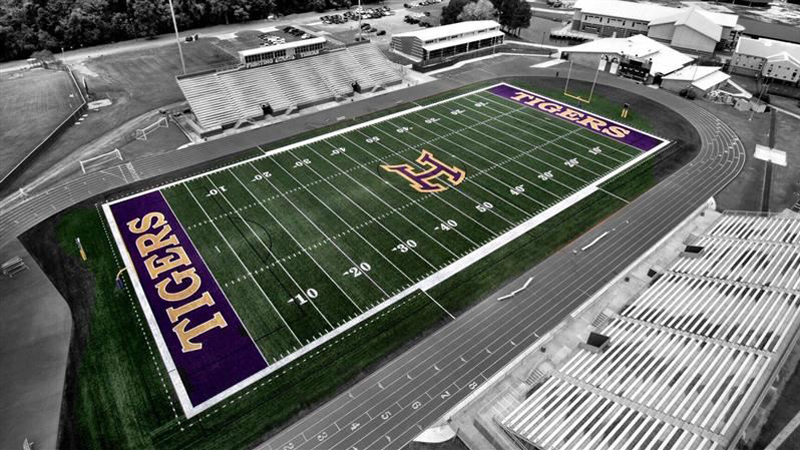 HAHNVILLE – Hahnville football coach Nick Saltaformaggio is enjoying the peace and quiet for a change.

For the first time since the veteran coach arrived on the West Bank of St. Charles Parish, there’s no TV cameras in his locker room, no reporters constantly knocking on his door. And that’s just fine by him.

“I haven’t been getting a whole lot of press lately and that’s a good thing,” Saltaformaggio said. “We’ve kind of fallen off the map and it’s been really nice.”

In 2014, all eyes were on the Tigers because it was the year Saltaformaggio took over the program from Lou Valdin and had to be initiated in Hahnville ways. The next few, everybody came to see prolific running back Anthony “Pooka” Williams, the 2017 Mr. Football who is now at Kansas. Then, Just when Saltaformaggio thought things would settle down, came into the Tigers’ 2018 season and a season full of controversy surrounding the transfer of quarterback Andrew Robison. Would he be eligible? Would he play? Would he start? It all took a toll on the Tigers’ locker room, Saltaformaggio said.

“The biggest thing that happened as a result of all that is, sides were taken in the locker room,” he said.

This year, he said, things are coming together. The team is rallying around starting quarterback Andrew Naquin, who wasn’t at the center of last year’s controversy but was right in the middle of it. The junior often didn’t know week to week – or even day to day – if he would start or even get to play.

“The atmosphere is different,” Naquin said. “Practice is a lot more competitive. We don’t have anything to stop us from playing football. It’s a very positive environment.”

Naquin will lead a team adjusting to a new offensive system under new offensive coordinator Daniel Luquet, the former Destrehan quarterback and Woodlawn head coach. The Tigers will go to a no-huddle spread – a first for Naquin.

“I just have to keep my guys aligned and keep everything moving, even when things aren’t always going peachy,” he said. “The adjustment’s been pretty swell.”

Naquin gains another weapon with the return of senior running back Daryl Evans, who missed all of the 2018 season after suffering a torn meniscus in the first game of the year. Senior Brandon Cormadelle, who filled the spot quite capably last year, will move to defense, which looks to be the Tigers’ strength this season. There are four college prospects on the defensive side, including linebacker John Pearsall, corner Syrie Lewis, safety Robert Jackson and Cormadelle. The 2018 season certainly did not live up to anyone’s expectations, beginning with the Tigers’ 1-4 start. Saltaformaggio said the loss to Destrehan hurt. The loss to East St. John stung. But the loss to Terrebonne was devastating.

“That’s a low water mark for me,” Saltaformaggio said. “There are certain expectations here. Hahnville High School should never lose to anybody 41-0. We have to figure out what happened and fix it.”