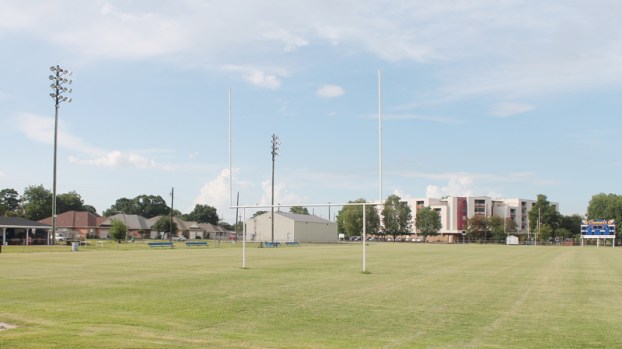 LAPLACE – The 2019 football season is less than a month away.

But you might not know it if you happened to drive by St. Charles Catholic High School this week.

While some area high schools were teeming with players and coaches going through drills in anticipation of the first official day of football practice in pads, all was quiet at the home of the Comets.

There were no coaches, no players. Actually, there’s not even a football stadium.

Oh, there’s a football field and goal posts, but that’s it. As of this week, there are no bleachers for fans to sit in.

The historic Thomas L. Dupuy Stadium was declared uninsurable in March and subsequently removed for the safety of the home side’s seating.

Monica quickly added that all the plans are in place for the new football stadium, school officials are just waiting for permits to begin the work on the replacement structure.

Fans may remember that the Archdiocese of New Orleans officially condemned Thomas L. Dupuy Stadium in March, citing the safety of the home side’s seating. The structure was declared uninsurable.

The school and its boosters held a series of fundraisers to come up with the more than $540,000 required to pay for the replacement of the stadium, which was built in the 1980s. The new stadium will seat 1,459 fans in 15 rows with a ramp for handicap access and 16 wheelchair spaces. It also will include a new press box and rooftop camera deck.

The visitors’ side of the stadium does not need to be replaced, nor do the stadium lights. Some of the original seating in Dupuy Stadium came from the old Tulane Stadium in Uptown New Orleans. Monica was an assistant football coach at Tulane at the time and saw workers dismantling the seating.

The Comets open the season September 6 at South Lafourche. The first home game is scheduled for September 20 against De La Salle. The team will begin workouts on Monday.