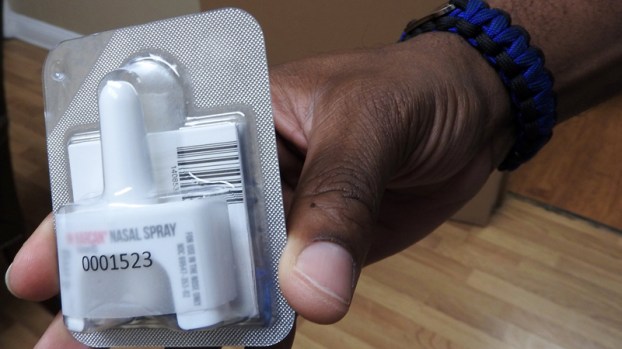 One package of Narcan - like the one SJSO recently had to administer to a suspect.

LAPLACE — Training paid off for St. John Sheriff’s Office deputies who recently saved an overdose victim with a Narcan treatment.
At about 9:40 p.m. July 18, deputies responded to a call in reference to a drug overdose at a business in LaPlace. Upon arrival, officers made contact with a 28-year-old male, whose mother had called 911 to inform officers that her son was unresponsive and barely breathing. After confirming the overdose, deputies were advised by their patrol commander to administer Narcan, a nasal spray version of Naloxone, a medicine that can immediately reverse the effects of an opioid overdose.
A deputy administered Narcan to the subject. Shortly after, the subject’s breathing improved and he became conscious and alert while waiting for emergency medical services to arrive for transport to a local hospital.
Last month, Sheriff Mike Tregre required all patrol officers, among other personnel, to attend a training on how to recognize an opioid overdose and administer the life-saving drug.
“Yesterday’s incident was a prime example of officers applying their Narcan training,” Tregre said. “Opioid addiction is an illness and accidental overdoses happen frequently. This training provided to the deputies may give this person and others an opportunity of receiving treatment and possibly full recovery of this illness.”