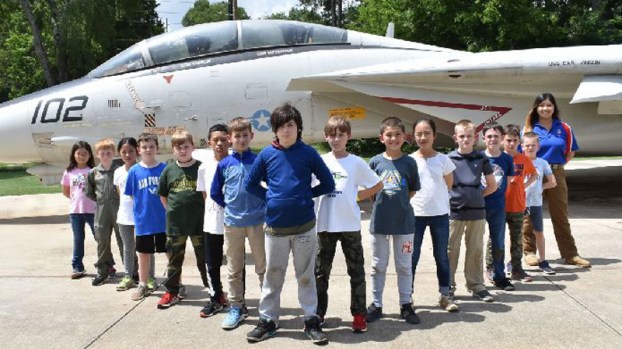 LAPLACE — Rising John L. Ory fifth grader Aidan Orgeron spent part of his summer as a fighter pilot in training in a station styled like the nose of an airplane, complete with a collection of buttons and a simulation screen of the sky.

Aidan participated in a weeklong NASA Aviation Challenge camp, held June 30 to July 5 at the U.S. Space and Rocket Center in Huntsville, Alabama.

The program, designed for students who have an interest in military aviation and the mechanics of flight, teaches aviation principles through flight simulators and scenario-based missions.

At the end of the week, Aidan and his fellow crewmembers graduated with honors and shook hands with American engineer and former NASA astronaut Don Thomas.

Though it was the longest time Aidan ever spent away from home, he adjusted well and quickly emerged as a Mach I patrol leader within the 9-11 age division.

“We did a Top Gun challenge, and I placed first in my team and second overall for Mach I,” Aidan said.

“There were different machs and different age groups. We learned about certain things on a cockpit and some signals of patrolling. There were some instruments in the airplane. I did pretty well with the people over there. I did really well sticking to the camp instead of thinking about home.”

One of the most memorable challenges was one where team members were trapped in the woods, according to Aidan. He and his team had to follow clues to rescue them.

As patrol leader, Aidan also got to out names in patrol lines and assign small tasks to others on his team.

At the camp, Aidan was excited to see a model F16 fighter plane and a colossal space shuttle. The only disappointment was when his age group wasn’t allowed to participate in a helicopter crash simulator he had been looking forward to.

According to program coordinators, more than 850,000 trainees have graduated from Space Camp programs since its inception in 1982. Among those graduates are NASA astronauts Dottie Metcalf-Lindenburger, Dr. Kate Rubins, Dr. Serena Auñón-Chancellor and Christina Koch, who is serving onboard the International Space Station.

The Aviation Challenge opened in 1990 to engage trainees in real-world STEM application. Aidan slept in quarters designed to resemble military bays, and he left with a new respect for aviation.

Aidan has had an affinity for space since third grade, when he learned of the 1969 trip to the moon and future plans for astronauts to visit Mars during a science class module. This was his first time attended space camp.

Aidan’s mother, Alaina Orgeron, said she is proud of her son’s drive to pursue an area of interest.

“I think it was very brave of him to be so far away from home for so long and stand out as a leader in his group, “Orgeron said, adding aviation is not her son’s only passion.

“In addition to being interested in aviation and flying, he has a lot of interest in meteorology,” she said. “He visited the Fox 8 station earlier this year to watch a news broadcast and learn more about being a meteorologist from David Bernard and Bruce Katz.”

Aiden poses with meteorologists David Bernard and Bruce Katz. in the Fox 8 studio

Orgeron said Aidan is also very involved in Mardi Gras season and interested in float design. Year after year, he rides in parades alongside his father, Eric Orgeron, a parade marshal who helps produce parades in New Orleans and Metairie.

Aidan is also active in Cub Scouts Pack 318 in LaPlace and hopes to become an Eagle Scout one day.

Drumline has been among his many special talents since second grade. He’s in talented music at John L. Ory, where he has also learned to play the piano, guitar, tambourine and xylophone.

He’s on the Mini-Me Drumline, based in Kenner, and performs with the Mini Drummers during New Orleans Pelicans basketball games.

Aidan is also a member of Junior Beta and a new addition to his school’s talented drama program.