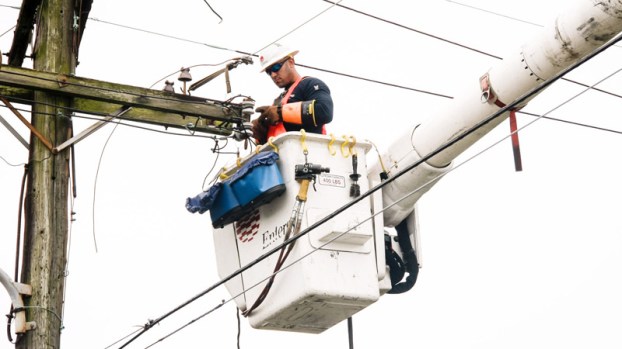 LAPLACE — Storm preparation is a continuous cycle without a beginning or an end for Entergy Louisiana, according to company spokesperson David Freese.

Long before a hurricane forms in the Gulf of Mexico and threatens local communities, Entergy representatives review a detailed and rehearsed plan that has worked well in previous recovery periods.

Such was the case for Hurricane Barry, which made landfall as a Category 1 storm last week. As of 9 a.m. Wednesday, an Entergy storm team of more than 4,000 had restored more than 330,000 customer outages across the state, according to Freese.

Approximately 5,000 of those outages were locally focused in the River Parishes, an area Entergy Louisiana has serviced for more than 90 years.

There was only one remaining power outage in St. John the Baptist Parish by Tuesday morning, according to a company release. A bulk of the affected area was restored by Sunday evening.

Freese said equipment and personnel were moved out of harm’s way to locations that allowed the company to quickly and efficiently respond to changing weather conditions.

“Facing severe weather can be extremely challenging, and we continually work to improve our storm response and our infrastructure,” Freese said. “We’ve worked to storm-harden our system. From aggressive preventive maintenance programs to using steel transmission structures, elevating substations that might flood and installing ‘isolation’ devices on lines to reduce outages — our goal is always to restore power safely and quickly.”

The dedication ceremony from Entergy’s new facility in Montz has been postponed.

Freese said Entergy has invested nearly $5 billion over the last five years to modernize and strengthen statewide infrastructure in its quest to provide clean, affordable and reliable power to more than 1 million electric customers.

“This includes building new, highly efficient power plants like the St. Charles Power Station in Montz,” Freese said. “At the same time, we’ve kept our rates among the lowest in the state and across the country.”

According to Freese, Entergy shareholders provided $9.7 million in grants in 2018 to support more than 700 nonprofit organizations. Approximately 50 percent of the contributions supported education and workforce development.

Additionally, Entergy is raising awareness of heat stress in local communities by donating fans to seniors through the Beat the Heat initiative.

In April, State Representative Ken Brass (D-Vacherie) said Entergy was assisting in providing electricity to place a traffic signal in the deadly intersection of Highway 3127 and Highway 3213, which had been the site of six crashes in a 12-month stretch.

At the time, Entergy representative Rhonda Colar-Myles said 15 to 20 service poles were needed to run a service line.

“It’s a community effort,” Colar-Myles said. “When we hear of fatalities in the area, we want to make sure we can do everything we can to make sure the residents are safe.”

Entergy recently rescheduled a grand opening a dedication ceremony of the new Montz plant due to Hurricane Barry response. A new date has not been announced.

The new 980-megawatt Power Station commenced operation on May 23, according to Entergy officials.

The station is being dedicated in honor of J. Wayne Leonard, former chairman and CEO of Entergy Corporation.

NORCO — Single mother Lynnietra Schofield had a vision to uplift women in a positive and supportive environment, letting those... read more