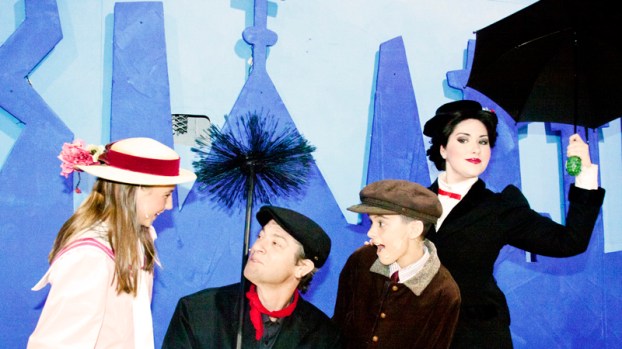 Hartley Faucheux, Jaret Treas, Kade Olivier and Chrissy Carter Cifuentes are ready to bring a magical performance to audiences in the River Parishes.

RESERVE — Shelves that fall and come back into place and self-decorating cakes are just a few of the magical elements included in River Parish Community Theater’s production of Mary Poppins, a show so grand, audiences will find it hard to believe they are sitting in a school gymnasium.

Chrissy Carter Cifuentes plays the leading role of Mary Poppins, and she said teamwork has guided the show from the initial set designing to seamless on-stage costume changes on Monday’s opening night.

The threat of severe weather from Hurricane Barry altered the show schedule, which now runs at 7:30 p.m. tonight (Wednesday) through Saturday night at St. Peter Catholic School in Reserve. There will also be a 1 p.m. matinee on Saturday, organizers said.

Mary Poppins has never been performed for River Region audiences prior to this week, according to Cifuentes. In the show, Mary Poppins takes young Jane and Michael on many magical adventures, and even adults can learn a thing or two from the nanny who advises, “Anything can happen if you let it.”

“I think this show is so phenomenal because it’s very challenging,” Cifuentes said. “It’s giving all of the actors and actresses a chance to heighten their talent. It’s great because it’s so professionally done. To know there is this level of theater in the River Parishes done not by Broadway professionals but by average people who have day jobs and lives — to know they can give a show of this caliber is unreal.”

Jaret Treas, who plays Bert in the show, has colleagues drive in from Mandeville, Baton Rouge and New Orleans to see the annual summer shows.

“They cannot believe this is happening in a little town called Reserve,” Treas said. “This is a Saengar type production. It’s the best $20 ticket in town.”

Treas took up acting at 9 years old but took a nearly decade-long break after getting married and having children. Once his daughter, Gabrielle, was old enough to feel the draw toward the stage, the family returned to River Parish Community Theatre for Shrek: The Musical in 2016.

Cifuentes also took a break from acting after getting married, but she agrees that the passion never dies. She returned to River Parish Community Theatre last year for the wildly successful Beauty and the Beast production, the first sold out show in the community theater’s history.

RPCT Board President Sean Roussel said the goal for this year isn’t to replicate the success of Beauty and the Beast, but to show Mary Poppins in its own light.

“People that are 70 and 80 years old are going to know the songs, just like kids who are 8 and 9 years old,” Roussel said. “ They might not know ‘Super Cal’ and ‘A Spoonful of Sugar,’ are from Mary Poppins, but it’s something they’ve heard before. Our audience goes from all ages, just like our cast goes from ages 10 to 72.”

Meticulously prepared special effects will leave the audience in awe, according to Roussel, who said every RPTC production adds a special spin. He said it’s incredible to watch actors and actresses bond through all the work that goes into every show.

“From the walls to the set, every piece up there is built and painted by this group,” Roussel said. “That’s the journey for us, and it’s remarkable to see.”

Director Darryl P. Clement said offering a matinee and an evening show on the same day is a first for the local area.

Chrissy Carter Cifuentes and Jaret Treas star in the 2019 summer production as Mary Poppins and Bert.

Ascension of Our Lord Council 9623 Knights of Columbus recently sponsored a bingo for the enjoyment of residents at the... read more