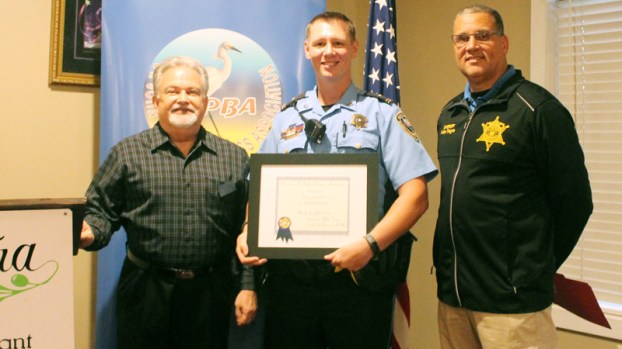 Tregre happily stepped up to the microphone to give the group a behind-the-scenes look at some of the day-to-day operations in the Sheriff’s Office, an update on the storm that was forming in the Gulf at the time and offer the business owners some advice on how to stay safe during their own operations.

First, Tregre presented one of his deputies, Lt. Jason Raborn, with the Officer of the Month award. Raborn was nominated by a St. John resident, the parent of a mentally ill woman who Raborn aided

“She left me a message praising how Officer Raborn treated her daughter,” Tregre said before the recorded message was played. “It was a very sincere message.”

In the recording, the mother of the woman said she wanted to brag on Lt. Raborn.

“He came and helped us with Nancy,” she said. “He was so kind, and we were desperate at that point. I felt safe with him and I just want him to be honored. He was wonderful.”

Reborn credited the critical incident training he received as a deputy in the department.

“(The training) talks about understanding people’s emotions and finding solutions,” Raborn said. “I’m very honored to have been a part of that training that the sheriff allows us to attend.”

Raborn said the woman was in a fragile state and had contemplated committing suicide.

“She was frantic,” Raborn said. “She had no other option at this point and didn’t know what to do. Basically I just took the time and spoke with her, found out what her options were and found out what solutions we could offer her. I took the time to just listen to her side of the story. Her family was kind of at wit’s end trying to figure out what was going on. She just needed an outside voice, somebody who she could rest her head on their shoulder and listen to what she had to say. So I offered her assistance; I offered her a solution that got her the help that she needed.”

As for storm preparation, Tregre urged residents to be vigilant and prepared and not to wait until the last minute.

“We’re no rookies when it comes to storms,” he said. “We’re no amateurs. Everybody knows their jobs. Don’t wait until the height of the storm to do what you’ve got to do. Get your batteries. Get your candies, your cookies. Eat the food out of your refrigerator in case the electricity goes out.”

Tregre took the time to boast to the group about his Opportunity Now Re-Entry Program for inmates. He said of the 25 most recent graduates, 23 were currently employed.

“I’m telling you it’s one of the best programs in the state. I’m so proud of it,” he said.

“We did not have a single incident,” he said. “Not one problem; not even keys locked in a vehicle. Everybody came out, enjoyed themselves in the 100 degree humidity, watched the fireworks, and everybody went home. Not even an accident.”