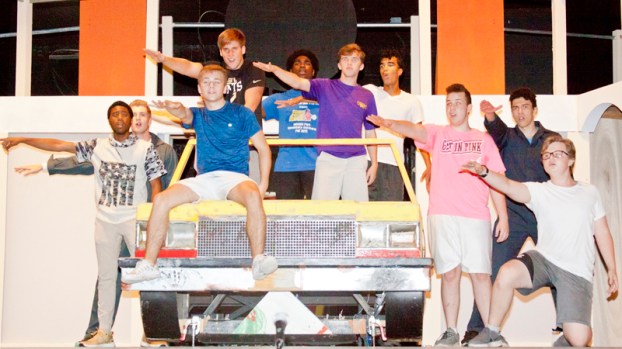 RESERVE — It doesn’t take long for Keri Clement to channel her inner Sandy when getting into character for St. John Theatre’s Summer 2019 production of Grease.

Clement has performed on stage for five years, taking part in many high school performances in addition to St. John Theatre summer shows.

This is her first leading role, and she looks forward to entertaining audiences as Sandy in Grease for seven performances between July 19-21 and 24-27.

The Rydell High School Class of 1959 is back on the St. John Theatre stage for the first time since 1996, allowing a new generation to experience the romance between head “greaser” Danny Zuko and new good girl Sandy Dumbrowski.

Iconic music and great vocals will evoke the sound of the 1950s and transport audiences back to simpler times.

“Sandy is a lot like me,” Clement said. “(She’s) very sweet. We’re both a little sensitive and can be very innocent at times, but there’s also that side that’s spunky. She’s classy and sassy.”

The cast of Grease is ready to present this year’s summer musical at St. John Theatre, located at 115 W. Fourth St. in Reserve.

“I think this year, the fact that there’s so many younger people in the show will make it really high-energy,” Clement said. “It’s going to be lots of fun. These kids are putting in extra effort and really working hard to make the show great.”

It takes six to eight weeks to prepare for a summer musical, according to director Mike Brooks. Dozens of cast and crewmembers have participated evening rehearsals since May, though planning for the show traces back to January.

“What we have done is added the songs from the movie to the play,” Brooks said. “The process is a lot more involved with all the royalties and rights.”

Beloved songs including “Grease,” “Hopelessly Devoted to You” and “You’re the One That I Want” were written specifically for the film and weren’t originally in the Broadway show, according to Brooks.

More than 40 cast members are featured in this year’s musical, Brooks said.

“We’ve got a huge ensemble. It’s a community theatre, and I wanted them to be a part,” Brooks said.

This year’s Sunday matinee will include a special nod to the Grease cast of 1996, Brooks said, adding former cast members will have a chance to come up on stage and be recognized.

St. John Theatre has hosted summer musicals for 39 years, and the history of the building dates back much further.

Clement said the family atmosphere is significant to the performance and to the community.

“You get really involved with your community,” Clement said. “It’s not just being part of a show. You’re actually part of this well known, small town community. You’re fundraising. You’re performing and providing entertainment, and you’re getting to know a lot more people by doing this.”