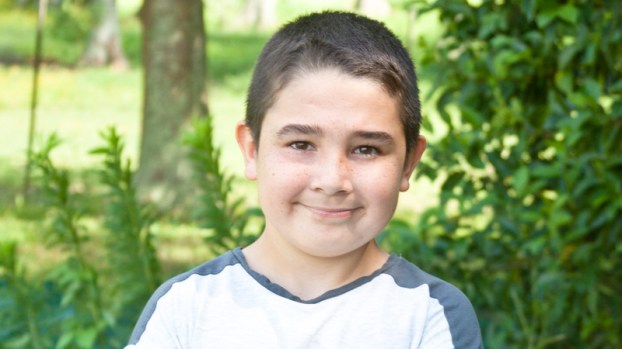 Incoming fourth grader Christopher Laven inspired others with his generosity when he raised money to send himself and others to summer camp.

9-year-old raises $700 to send himself, others to summer camp

LAPLACE — Christopher Laven of LaPlace, only 9 years old, astounded Celebration Church members with his selfless heart when he raised more than $700 to send himself and other children to summer camp in Mississippi.

When Christopher decided to attend Celebration Church’s Kidztown Camp at Waukaway Springs Christian Retreat Center, his mother, Jamayca Gonzales, promised to help him with fundraisers to offset more than $200 in registration and fees.

Christopher opted for a walk-a-thon and an old-fashioned lemonade stand to raise the funds.

Every evening for weeks, Christopher practiced walking laps around Thomas F. Daley Memorial Park next to the Central Branch Library in LaPlace, pushing his limits to meet lap challenges from donors.

Family, friends and supporters pledged donations. When the day of the walk-a-thon arrived, Christopher made 10 laps around the track.

The family effort allowed several children to afford an unforgettable weekend of paintball, hiking, s’mores and pizza. Christopher didn’t draw attention to his choice to donate the money to other campers. He considered it an easy decision.

“I just like to help people,” Christopher explained. “I’ve always liked to help.”

Christopher Laven was all smiles at camp last month.

Jamayca said Christopher’s dedication to helping extends to their home.

At a young age, Christopher stepped up to help with household chores as his mother recovered from a stroke.

“I’ve had four strokes total,” Jamayca said. “The last one was a bad one. He actually heard that one, so he had to grow up pretty quickly and learn to do things after that last stroke, unfortunately.”

According to Jamayca, Christopher sweeps the house and helps with dishes and laundry when his mother isn’t able to stand for long periods of time. He makes his own breakfast and knows how to cook simple meals.

Celebration Church member Debbie Stricks said Christopher is constantly helping out. After she had here hip surgery, she “hired” him to help with her care.

“He really went above and beyond, not only raising money for himself, but raising money for other children to go to camp,” Ford said. “I would just encourage people to be like Christopher and have a heart for giving.”

Ford said Christopher is known for his contagious spirit.

“He lightens up a room with his joy and his smile,” Ford said. “He brings so much joy, so much laughter, to other people. He is someone who always cares for others.”

Christopher’s kindness didn’t stop with the camp donations; after registration was paid for, he voluntarily donated the leftover money to Celebration Church’s children’s ministry, even after he was given the choice to keep some for himself.

Christopher is an active part of the children’s ministry, according to Jamayca, who said her son also helps her care for the younger kids during Sunday morning church service.

Backpack Extravaganza back for 2019: 1,000 children will receive school supplies

LAPLACE — Families start lining up outside of the St. John Community Center as early as 5:30 a.m. each year,... read more