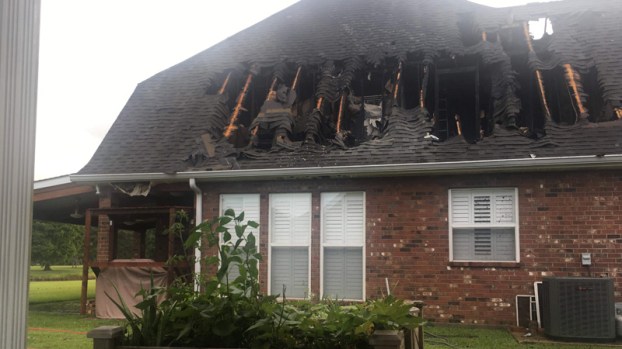 No injuries in LaPlace house fire

LAPLACE – No one was injured in the Saturday evening fire that burned a gaping hole through the roof of a LaPlace man’s home.

The homeowner is safe and staying with family, according to officials.

The St. John the Baptist Parish Office of Fire Services was alerted to a fire at 172 River Oaks Drive in LaPlace at 5:40 p.m. Saturday, and the first of five units arrived on scene approximately three minutes later.

One adult occupant was home at the time of the fire, according to Chief of Operations Cain Dufrene. As the fire burned in the attic, the homeowner started smelling smoke from downstairs. When he walked upstairs to investigate, he discovered thick clouds of smoke and quickly called 911.

“We had the fire pretty much under control in about 25-30 minutes, contained to the second story of the building in the attic,” Dufrene said.

He commended the firefighters for acting quickly and diligently in the intense summer heat amplified by heavy uniforms and a roaring fire.

“The first crews got there and did a really good job of knocking down the heavy fire and stopping it from spreading,” Dufrene said. “Once we got another crew there, we made an interior attack on it to knock it down.”

Despite the quick response, significant water and smoke damage were sustained throughout the house, and the fire burned a hole through the roof.

“We contained it to that area where it was, but it had already damaged a lot of the house before we got there,” Dufrene said, adding the cause of the fire is undetermined. “We kind of know where it started. We just can’t figure out exactly what started it. It was kind of in an attic board space. There were a lot of things stored up there.”

Many personal belongings were lost and the house will need to be gutted, according to neighbor Debbie Stricks. Despite this, she said the homeowner is filled with “peace, love and hope for the future.”

The family is not seeking donations from the community at this time.

The majority of residential building fires result from cooking, according to 2016 data from the U.S. Fire Administration.

Attic fires comprise approximately two percent of all residential fires, and 43 percent of attic fires are linked to electrical malfunctions.

Most prevalent in the winter months, attic fires can be difficult to detect before damage is done, according to the USFA. Fuel sources such as wood support beams and stored items can make a fire grow larger.

One of the Administration’s topical fire reports stated, “Attics are not commonly used as occupied spaces and, as a result, they usually do not have smoke alarms or heat sensors. When a fire occurs in an attic, it is common that it will go unnoticed until smoke or flames, escaping from the roof, are visible from the outside.”