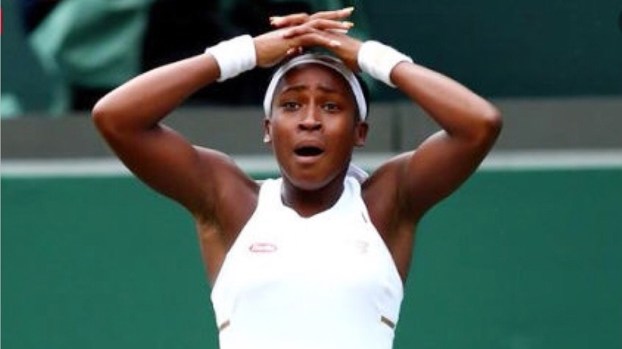 Coco Gauff recently had her Wimbledon debut as the youngest player ever to qualify for the event in the Open era.

Those waves reached all the way to St. John the Baptist Parish.

Coco, the daughter of Corey and Candi Gauff, has deep ties in the area. Melvin Gauff of Reserve is her grandfather. Lucien Gauff III, the St. John Parish assessor, is her cousin. She also has dozens of aunts, uncles and cousins who still call the River Parishes and the New Orleans area home.

None of them were able to fly across the ocean to watch young Coco make her Wimbledon debut Monday, becoming the youngest player ever to qualify for the event in the Open era. But they sure were there in spirit as she took on her idol, Venus Williams, in a first round match – and stunned the world with her win.

Coco continued her incredible run Wednesday by dispatching former semifinalist Magdalena Rybarikova 6-3, 6-3, booking a spot in the third round of the Wimbledon tournament in the process.

On Friday she won again, rallying to beat Slovenian veteran Polona Hercog, 3-6, 7-6, 7-5, to advance to the fourth round. She will play Romanian Simona Halep, the No. 6-ranked women’s singles player, on Monday.

River Parishes family members stand in support of Coco Gauff and attend her matches whenever possible.

“We had about 20 of us on a group text,” Lucien said after her first round win. “We all sent her text messages telling her, ‘You got this. Let’s go.’ We were all watching it wherever we were and sending messages back and forth during the match. All our phones were blowing up.”

And when it was over, the group celebrated together – via technology.

“It was like, ‘Yes! She did it!’” Lucien said. “In that moment we were all with her together.”

Also watching was Parish President Natalie Robottom, who said the family ties between the Robottoms and the Gauffs goes back generations.

“I am an avid tennis fan, and watching a hometown favorite makes it much more exciting,” Robottom said, adding her husband is good friends with Coco’s great uncle Darwin (South) Gauff.

Coco’s father, Corey Gauff, is the oldest of eight children. Born in New Orleans, he moved to Florida with his mother as an infant.

An athlete himself, Corey played college basketball at Georgia State University. But he frequently visited “home” during the summers, keeping his Louisiana roots alive. He also gave tennis a try when he was younger, playing on the courts at DuPont and Regala parks, but he never really took to it.

His daughter, on the other hand, was a prodigy. She won the “Little Mo” international tennis tournament when she was only 8.

Before Coco was born, Venus Williams had won four of her seven Grand Slam titles. On Monday, Coco was hard-pressed to put into words what this day meant to her. On her Twitter account, she posted a photo of herself filled with emotion over her accomplishment with the simple words, “What a day.”

“You’re shocked when you play your hero, for sure,” Coco said in her post-match press conference. “I mean, I never expected this to happen. I literally got my dream draw and I’m amazed that I was able to pull it out. She played amazing.”

Asked to describe herself, Coco told the international media that she’s always goofing off and cracking jokes.

Coco Gauff jokes around with her New Orleans-area cousins during a previous trip to St. John the Baptist Parish.

“I was practicing the other day and people were taking pictures of me – it was actually quite a few people and I was just, like, smiling, you know,” she said. “The pros who have been here a long time were all serious but I couldn’t help but laugh because it’s, like, weird to have people taking pictures of me.”

Also not used to the cameras is Corey, who was shown frequently during the match cheering for his daughter. His exuberant celebration at the end of the match endeared him to many. He told a reporter for The Times-Picayune/Morning Advocate that he kind of forgot he was at a tennis match when he jumped up, pulled off his hat and thumped his chest.

LAPLACE – There hasn’t been much time for any dust to accumulate on the state championship trophy that now resides in... read more