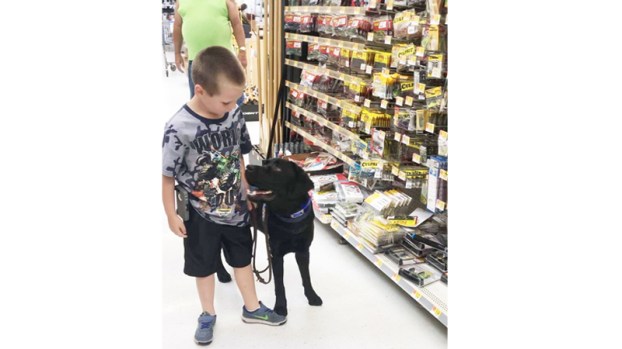 Luke Giammolva recently had a chance to meet a diabetic alert dog, and he’s searching for one to call his own.

DESTREHAN — A four-legged companion capable of sniffing out blood sugar levels could be the perfect match for a 7-year-old facing type 1 diabetes, but it will take the support of the community to offset high costs of specialized service training.

With no family history of diabetes, there wasn’t immediate cause for concern when Luke Giammolva showed signs of increased thirst in the hot and humid months of summer 2018.

That changed when the Destrehan boy, 6 years old at the time, dropped 12 pounds in one month without explanation. Alarm bells sounded in his mother’s mind when he approached her one night, shoulder blades and scapula protruding as if he hadn’t eaten in weeks.

Sister Emily Giammolva steals a kiss from her little brother, Luke, who has endured a tough year since being diagnosed with type 1 diabetes in 2018.

Lying in bed with her son not long after, Rachel Giammolva watched as he ate M&Ms before briskly chugging two 650 ML bottles of water.

“They said had we waited another day, he probably would have been in Diabetic Ketoacidosis, which usually puts you in the intensive care unit,” Rachel said. “We were lucky enough, blessed enough, that didn’t happen.”

Luke’s mother, Rachel Giammolva, said her son is excited about finding a new service dog companion that could potentially save his life.

Life in the past year has been a rough adjustment, marked by five shots of insulin a day, frequent blood sugar monitoring and the constant fear of a dangerous situation turning fatal.

Luke’s monitor helps, and its alarms alert his family to provide fast-acting carbohydrates or insulin if his glucose levels drop too low or spike too high.

However, the technology isn’t 100 percent accurate, and Luke’s health can take unexpected turns whether he is sitting down to watch a movie or sleeping in his bed at night.

Through research, Rachel learned a diabetic alert service dog could be an essential member of Luke’s care team, capable of sensing changes in his blood sugar faster than a glucose monitor.

Low and high blood sugar levels release chemicals in the body that have distinct odors undetectable by humans, according to Diabetics Alert Dogs of America.

A training process, costing between $10,000 and $16,000, teaches dogs to alert owners as soon as a shift is detected. Labradors, golden retrievers, goldendoodles and labradoodles are best suited for the service.

While the cost was intimidating, Rachel’s coworkers convinced her to start a GoFundMe page, titled “Luke wants a puppy, not just any puppy! DM1 buddy.”

The response has been incredible, according to Rachel.

Luke Giammolva, 7, has a blood sugar monitor to help manage type 1 diabetes. However, the monitor is not 100 percent effective.

More than 70 donors have banded together to raise $5,000, and the number is still growing. Others have offered Luke puppies from as far away as New Jersey.

“It’s amazing,” Rachel said. “I’m overwhelmed. I’ve gotten so many messages that I feel like I’m a manager for a superstar. It’s been so, so humbling and such a blessing.”

Luke Giammolva during a recently visit with a highly trained diabetic alert dog.

Even more special is the affect it’s had on Luke’s emotional state.

“To have a companion is probably the ultimate thing,” Rachel said. “He’s so excited about the prospect of having this dog that’s his, so that’s exciting to me in itself. It’s such a rough diagnosis that when I see these bouts of when he gets excited, it’s so rewarding for me.”

Dat Dads’ Club of Luling is hosting a community pool party and barbecue from 8 to 11 p.m. July 19 at Mimosa Swim and Racquet in Luling to raise funds for Luke.

To donate to the GoFundMe, visit gofundme.com/f/luke-wants-a-puppy-not-just-any-puppy-dm1-buddy.

HAHNVILLE —A St. Charles Parish jury found Sylvester Hayman, 60, guilty of one count of indecent behavior with a juvenile and one... read more