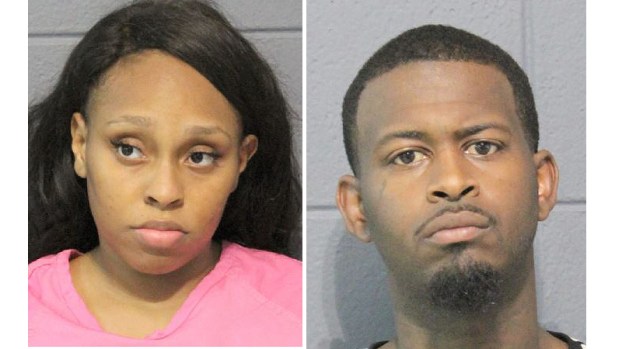 Man and fugitive from Houston arrested during traffic stop

LAPLACE — A traffic stop on I-10 East in St. John the Baptist Parish led to the arrests of Michael James Caliste Jr., 26, of Marrero, and Doniqua Williams, 24, a fugitive from Houston, Texas.

Deputies were conducting speed enforcement on I-10 at about 8:20 a.m. June 21 when they observed a vehicle traveling at a high rate of speed.

After a brief pursuit, the driver, identified as Williams, came to a stop. Deputies observed a passenger, who initially gave a false name but was later identified as Caliste, and two children in the back seat, who were identified as their children.

One child was unrestrained, according to police.

During the stop, officers detected the odor of suspected marijuana. On further inspection, they observed a marijuana cigar and a tin can containing a mixture of ash and marijuana clippings inside the vehicle.

A computer check revealed Williams did not have a Louisiana driver’s license and had an active warrant for felony theft from Houston Police Department.

The children were turned over to relatives. Williams was charged with driver must be licensed, speeding, and child passenger restraint system. She remains in custody awaiting extradition to Houston.

Caliste was charged with resisting an officer, possession with intent to distribute marijuana, possession or distribution of drug paraphernalia 1st offense and two counts of illegal use of controlled drug in presence of persons under 17 years old. Caliste was released June 24.

LAPLACE – Don’t be surprised if you see Ma’Chai Johnson in a major league baseball uniform one day. It is... read more