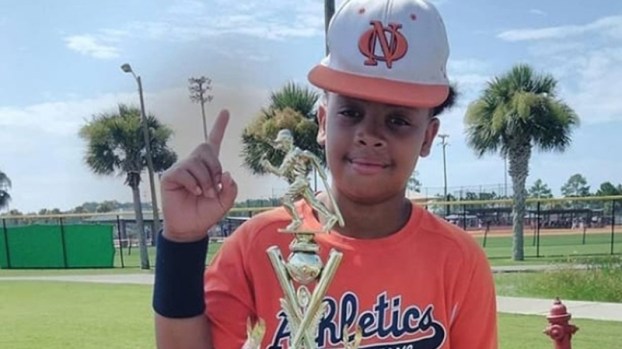 Ma’Chai Johnson, 11, will travel to Houston for the second round of try-outs for the 11-under Team USA squad.

LAPLACE – Don’t be surprised if you see Ma’Chai Johnson in a major league baseball uniform one day.

It is the dream of the youngster from Garyville. But, for now, he would be just as happy to wear the red, white and blue uniform worn by the players of Team USA.

That’s a possibility too.

On July 7, Ma’Chai, 11, will travel to Houston for the second round of try-outs for the 11-under Team USA squad. He sailed through the first round of try-outs in early June, going through a series of drills at Tulane University. If he performs as well in Houston, Ma’Chai could earn a spot on Team USA. Then he and his family will travel to North Carolina for the NTIS Champions Cup to be held at the USA Baseball National Training Complex.

“I would be excited,” said Ma’Chai, a rising seventh grader and straight-A student at Garyville-Mt. Airy Math and Science Magnet School.

His chances probably are pretty good.

Ma’Chai Johnson is a baseball player on the rise and an incoming seventh grader and straight-A student at Garyville-Mt. Airy Math and Science Magnet School.

According to his mother, LaWanda Brown Dunn, Ma’Chai started playing baseball when he was just 4 years old and, even then, it was obvious that he was something special on the field.

“He hit his first home run when he was 7 years old,” LaWanda said. “Over the fence. He hit 10 that year, about five of them over the fence.”

Ma’Chai plays on a slew of recreation and travel ball teams both in St. John the Baptist Parish and in New Orleans, including the Crescent City Athletics.

Of course, Ma’Chai also has his own personal trainer – his uncle, Randy Brown, who was a standout baseball player at John Curtis Christian School.

“He puts him through drills and works on his hitting,” LaWanda said. “His dad, Michael, also works with him.”

Those skills helped Ma’Chai get through the first round of drills at Tulane.

“There were a lot of people,” he said. “We had to throw and run and hit in the cage.”

Ma’Chai Johnson plays for various recreation and travel ball teams both in St. John the Baptist Parish and in New Orleans.

Besides an outstanding baseball player, Ma’Chai also is a pretty good basketball player. He plays on several recreation and AAU teams in that sport as well.

“I love them both,” he said, adding that he would rather be a professional baseball player than basketball player.

Ma’Chai’s mom says, whatever he elects to do, he will have a huge support system. His large extended family goes to all of his games to cheer for “Mac.”

“His little brother Michael is his biggest fan,” LaWanda said. “He wants to be just like him.”

His father Michael is equally devoted and always goes above and beyond to make sure he has all of the latest sports gear, bats and cleats.

Ma’Chai is equally talented in the classroom. He was Student of the Year in 2018, and he recently finished the 2018-2019 school year as the only sixth grader to achieve all As for four marking periods.

RESERVE — Ever since he was a little boy, Jordan Loving dreamed of going to LSU. Once he became a... read more