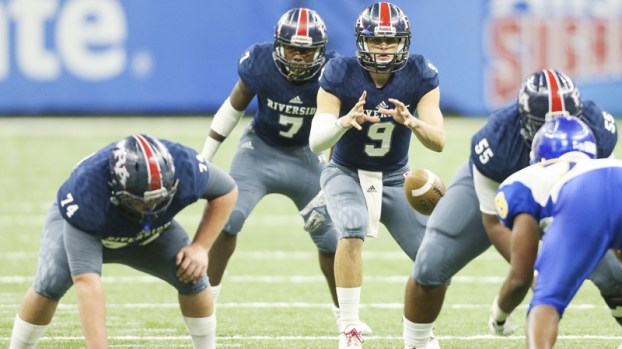 RESERVE — Ever since he was a little boy, Jordan Loving dreamed of going to LSU.

Once he became a pretty good football player at Riverside Academy, Loving began to dream of playing for LSU, of wearing a purple and gold jersey and running through the tunnel onto the field as a Tiger.

Loving got to do all those things last season at LSU. He just never got to play.

Now the Tiger is changing his stripes. A red-shirt freshman with four years of eligibility, Loving has transferred to Southeastern Louisiana University to see if he can work his way onto the field as a Lion.

“It’s exciting,” Loving said. “I just thought it would be a good fit for me and a great opportunity.”

Jordan Loving passed for 2,957 yards and had 29 touchdowns his senior year at Riverside Academy.

Loving, who graduated in 2018, was a prolific passer for the Rebels, but went largely unnoticed in the recruiting world. He passed for 2,957 yards and 29 touchdowns his senior year. But he also played baseball and basketball, so he missed going to many of the big recruiting showcases many players attend. He stayed largely off the recruiting radar.

But Loving bypassed the offers he did get to become a preferred walk-on at LSU.

“They just said they had a spot for me,” Loving said.

The move gave him no money (except TOPS) and no promises, but it did fulfill his dream.

“For me, just growing up in Louisiana, on Saturday nights basically the whole state shuts down and you’re watching LSU,” he said. “Pretty much the whole population are die-hard fans and I was included in that. That was definitely my dream to play at LSU, and when I got the walk-on opportunity. I felt I couldn’t pass it up.”

Loving spent all of the 2018 season as one of many backup quarterbacks. He worked out with the team, sat in meetings, watched film and dressed out for all the home games, but the sideline was as close as he got to the playing field. He said he never will forget the first time he got to run onto the field as a Tiger.

“They say the valley shakes,” he said. “And it really does. It’s really an adrenaline rush. You get goosebumps.”

But after that, Loving headed to the sideline with the rest of the dreamers.

“It was bittersweet because I learned a lot from the coaching staff and from the other quarterbacks on the roster,” he said. “Of course I wanted to be out there playing. I just stayed patient and continued to work my craft and did as much as I could to continue to find new ways to get better. My knowledge has grown so much.”

But the waiting has become too much for Loving.

About two weeks ago, Loving put his name into the transfer portal, a database where coaches can see players on the move. It just so happened that Loving’s former high school coach, Chris Lachney, is now an assistant coach at Southeastern.

“There’s literally no gray area here,” Lachney said. “I coached the kid from when he was 6 year old. I know exactly what we’re getting and Jordan is physically talented enough and gifted enough to play here.”

“He called me up and said, ‘First, I want to check up on you and make sure you’re OK,’” Loving said. “He knew LSU was a big deal to me. Then he said, ‘We’ve got a spot for you at Southeastern.’”

It was a good fit for Loving, whose mother, Tara Maus Loving, is in the Southeastern Athletics Hall of Fame for her softball career. There, he will be fighting for a spot against 2018 starter Chason Virgil and incoming Arksansas transfer, Cole Kelley. It also is bittersweet. Loving said he will bring his same competitive nature to Hammond, along with a few new skills.

“I just learned patience,” he said. “That was a huge thing for me, knowing you have a goal and you have a destination where you want to get, but the journey’s not always going to be how you want it. My goal was to be an LSU Tiger and I guess I accomplished that goal. But I really wanted to give myself an opportunity to play. And I really didn’t think that’s going to happen at LSU.”