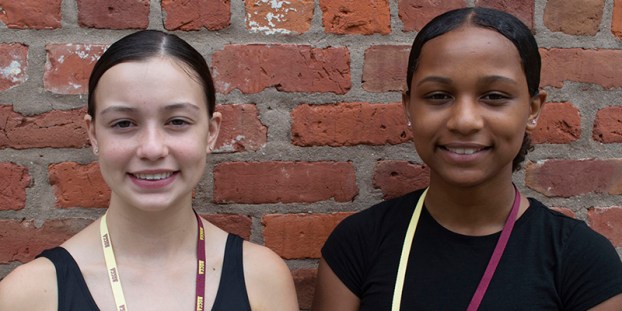 From left, Isabel Pascual and Amere Stewart of St. John the Baptist Parish were accepted into NOCCA for high school.

Stars on the rise: Young artists take on NOCCA

LAPLACE — For triple threat singer, dancer and actress Amere Stewart of LaPlace, auditioning for New Orleans Center for Creative Arts was another checkpoint in her journey toward college at Julliard and a star-studded Broadway career.

For Isabel Pascual of Reserve, a competition queen at Aimee’s Dance Academy, the NOCCA audition was a step out of her comfort zone and a chance to rise to the challenge of a rigorous curriculum.

The girls, both incoming freshman, were accepted into their respective programs and will become full-fledged NOCCA students in the fall.

This month, they put their best foot forward in a demanding, invitation-only summer intensive.

Isabel is kind-hearted and timid at first meeting, but she’s no stranger to performing on stage.

A dancer of 12 years, 14-year-old Isabel has traveled to New York to train with the acclaimed Rockettes and Broadway professionals. A solo performance at a local competition earned her the title New Orleans Miss DMI Jr. this competition season.

However, NOCCA’s high standards felt more than a little intimidating when it came time to audition.

After three weeks of training four hours a day in ballet, modern, jazz and tap at the summer intensive, Isabel is proud of her progress, and she has a message for those who are frightened by new experiences.

“I didn’t want to try out for NOCCA,” Isabel said. “I was scared. I was in a little box, in my comfort (zone), and I didn’t want to get out. I feel like a lot of people are like that, but once I stepped out and tried something new, it went right.”

The summer intensive was just as hard as she expected, but in the most wonderful way. The instruction helped Isabel discover a passion for modern dance.

“For the past three weeks, she’s been dancing for four hours a day, and then she comes home and practices more,” Pascual said. “She’s definitely not a normal teenager. She’s very driven. I’m proud of her for taking the chance, auditioning and putting herself out there.”

Amere Stewart is well versed in the world of performing arts. At only 14 years old, she has jumped on flights to Hollywood and sat in between Blue Ivy and Zendaya in the music video for “All Night” by Beyoncé.

Amere has appeared as an extra in various Hollywood films, and she’s preparing to release her debut single, “Here I Go,” on iTunes July 17.

At the NOCCA summer intensive, Amere learned about trusting the process, the role of the ensemble and the necessity of critique in musical theater. The month-long program concluded Friday with a performance parodying traditional musical elements.

“I believe it’s called the summer intensive because it is intense,” Amere said. “It requires a work ethic. That’s good for me because it exercises my voice. It helps for me to keep my instrument warm for everything that I need to do. I’m also learning scripts and that’s good because I audition a lot, and I need to have a fast memory to remember my lines.”

Amere is incredibly disciplined in her blossoming career and academic life. At East St. John Preparatory Academy, she earned 6.5 high school credits and top 10 in her class, in addition to softball MVP and Beta Club and STEM awards.

Her mother, Rachel Stewart, remembers when Amere took up dancing in the church, determined to keep up with girls older and taller than her. A few years later, Amere surprised her family by revealing she could sing in the middle of an audition.

Stewart said Amere’s talent is a product of the environment she grew up in, following family tradition.

“I believe she gets it from me and her older sister,” Stewart said. “Her sister (Alexis Victor) is 19, and Amere always looked up to her because she pursued it first, always doing her acting thing and being big in dance.”

“Her thing is Broadway because she loves it,” Stewart said. “With the auditions, there’s no telling where she could go.”

LAPLACE — Under new Louisiana law, the River Parishes Tourist Commission has the authority to levy and collect up to... read more