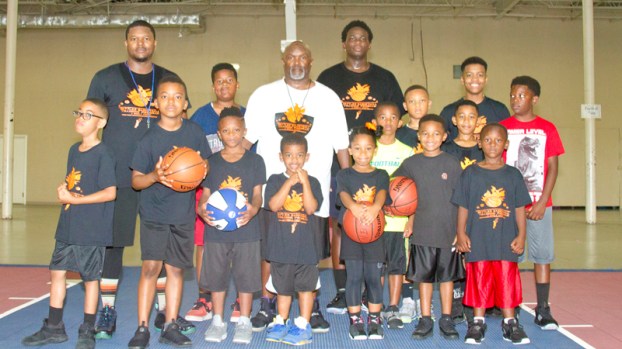 LAPLACE – At age 6, Kyndalyn Hill is a tiny little girl who loves dance and cheerleading, but she also loves sports – and keeping up with her older brother, Kenton, 9.

Mom Gloria Holmes loves getting her kids out of the house and away from the TV and video games for a couple of hours. She also loves when her children learn life skills.

So when Holmes heard about a kids’ basketball camp in LaPlace, it was a perfect match for everyone.

Tomye Nettles Sr. has been a basketball guy all his life. He played at East Jefferson High School back in the day, then spent many years coaching kids – including his own – in various recreation and AAU leagues. Tomye Jr., or T.J., played at Bonnabel High School and then played at a couple of junior colleges.

Now, together, Tomye and T.J. spend their Saturday mornings teaching, not just basketball skills, but also life lessons, to children at the Nettles Basketball Training Program: A Godly Touch, held weekly at New Wine Christian Fellowship. The class is open to boys and girls from age 6 and up. The course began in April and will run through October, from 10 a.m. to 1 p.m. Students are still being accepted.

Campers certainly are put through their paces, working on shooting, hand-to-eye coordination, footwork, etc. But they also try to teach them lessons they can use in life.

“We do different drills for them,” Tomye said. “Shooting, dribbling, pivot, ball-handling, everything.”

But Tomye said he also tries to teach his students that there is much more to life than basketball.

T.J. used his skills in basketball to see a bit of the world, playing first in Shreveport, then Missouri and Iowa.

“It’s just a life experience,” he said. “From when I was 5, we had all-stars and we went out of town and traveled to places. (In college) I got scholarships, so I used that tool so I could go to school. It’s not just about basketball. It goes way beyond that. We try to teach life skill, life lessons, discipline.”

Holmes said Kyndalyn loves the camp and she is thrilled with her progress.

“It’s awesome,” Holmes said. “She loves it. The technique she’s learning, I didn’t want her to pick up bad basketball habits by being taught the wrong way to shoot. I wanted her to learn the right way. And she has gathered so much.”

Jaylen Ellsworth, 13, said the camp has been good for him.

“It helps me get better by practicing different drills,” he said. “He’s intense.”

Willie Dupard was a pretty good basketball player at Southeastern Louisiana University in the 1990s. Now he brings his son, Bryce, 9, to the Nettles Camp.

“There’s only so far I can take him,” Dupard said.

For Tomye, giving up his Saturday mornings is way of giving back to the River Parishes community he adopted in 1994.

“I enjoy it,” he said. “This is my life. I enjoy coaching kids. I enjoy teaching. A lot of people want me to coach right now but I don’t want to.”

The Nettles Basketball Training Program: A Godly Touch is still accepting students. The cost is $100 for one child, $180 for two children and $260 for three children. Call 985-210-6335 for more information.