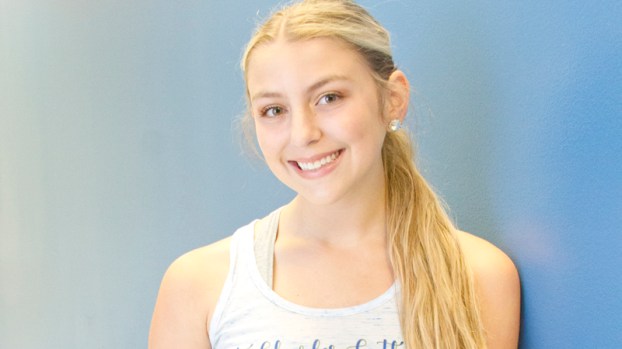 LAPLACE — Hours before junior prom, Sydney Pfister was facilitating boccia games as a volunteer for the Bayouland Special Olympics.

Helping others has always been a priority for the St. Charles Catholic rising senior, whether it involves collecting service hours or acting as a role model for younger teammates on the Starsteppers dance team.

Pfister earned the silver service award for going above and beyond the 15 service hours required by her religion class.

The Special Olympics is among her favorite service events, and she’s considering majoring in special education at Louisiana State University or Southeastern Louisiana University after graduation.

Hardworking and driven to do the right thing, Pfister takes on a caretaker position in many aspects of her life.

As a new member of the St. Charles Catholic retreat team, Pfister will be a positive role model to younger students at St. Joan of Arc, St. Charles Borromeo and other feeder schools.

Sydney Pfister hopes to be a role model for younger teammates Chloe Genovese and Dominique Johnson.

Her task is to prepare middle schoolers for the transition to high school while supporting their spiritual growth.

Pfister also serves as a St. Charles Catholic ambassador, responsible for introducing prospective students to the school through guided tours.

She’s a four-year Beta Club member and actively involved in her school’s Fellowship of Christian Athletes organization, where she is part of the leadership team.

More recently, she was recognized with the American All-Star award at a dance camp for her sportsmanship, commitment to improvement, and ability to lead others.

This is the second consecutive year she’s been honored with the American All-Star award.

“She’s very dedicated to her team and her teammates,” Faucheux said. “She goes out of her way for any of the girls who need help. She’s just very helpful and a good leader.”

According to Faucheux, Pfister volunteers to drive her younger teammates around whenever they need a ride.

“All in all, she’s just very outgoing and full of personality, especially when she dances,” Faucheux said. “That’s all the Starsteppers. They shine so well together.”

At state competition earlier this year, Pfister and her teammates had to hurriedly change lines and improvise routines after one of the dancers suffered an injury.

To Pfister, dance is a way to express herself when words can’t.

“It’s a great way to get emotions out without speaking,” Pfister said. “You can really tell a story with dancing, no matter what type of dance you’re doing.”

She’s experienced the thrill of winning kick and jazz divisions at national competition at Walt Disney World alongside older teammates.

The older girls have graduated, leaving Pfister as the only incoming senior on a team with no juniors and plenty of eighth through 10th graders.

It will be a year of adjustment, but Pfister is ready to rise to the challenge.

“I’ve always been the baby to the team because I was the youngest and the only one in my grade,” Pfister said. “Now that I have younger teammates, I really try to be their role model. Whenever I leave, I want them to follow in my footsteps.”

This week, Pfister spent time with her teammates volunteering for the Starsteppers Mini Camp.

Pfister is the daughter of Stephen and Casha Pfister.