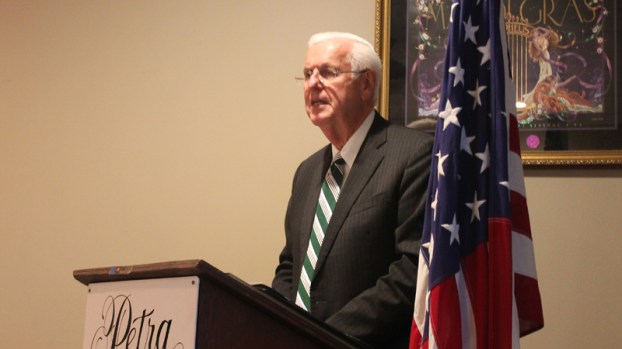 Louisiana Insurance Commissioner Jim Donelon urged residents to prepare themselves for hurricane season by finding their insurance policies, conducting a check-up with their insurance agent and taking inventory of their possessions.

That was just some of the sound advice Donelon gave to members of the St. John Business Association at its monthly meeting Wednesday night at Petra Restaurant & Lounge in LaPlace.

Donelon, now in his 12th year as Commissioner of Insurance, said he has been making his way through the major media markets of the state to give the same advice to state residents, especially those along the coast.

“I do what I call my ‘Storm Tour,’” Donelon said. “It gets the media attention it deserves because we are one of the most vulnerable states in America. In fact, we are the third most often visited state by hurricanes over the last 100 years – Florida being No. 1, Texas No. 2 and we are No. 3.”

Donelon noted that meteorological predictions are for an ‘average’ hurricane season, which may sound like good news but means little.

Louisiana is still paying for the damage from previous storms, including Hurricane Katrina, which was the largest insurance cost in history at $50 billion, with more than 1.7 million claims across six states. Louisiana collected a record $25 billion in insured losses. Prior to that, the largest insurance payout in Louisiana was a random Sunday evening hailstorm in New Orleans which cost $500 million.

Donelon added that, while there were 1,500 deaths attributed to the 2005 storm, he believes many more could be added to that total who just “gave up” in the aftermath.

“After losing everything of value to them, all of their lifelong possessions, mementos, souvenirs and important collections of family heirlooms they had to put out on the sidewalk and have carried away – not to mention the fact that they had to start over and start rebuilding their lives and property,” Donelon said.

With that in mind, Donelon urges residents to do a thorough checkup of all insurance needs, including home, auto and health. Homeowners should carefully read their policies to see what is covered – and what is not. The language is important when it comes to storms, named storms, acts of God, etc. Most policies now have a hurricane deductible, which must be paid by the homeowner. That deductible is a percentage of the cost, not of the damage suffered, but of the actual cost to repair or replace it.

Donelon also urged residents to use their cell phone cameras to photograph and video their homes and their contents.

“Walk through the house and take a picture of that flat screen TV,” he said. “Be prepared to make a claim. That will start the process and make things much more efficient.”