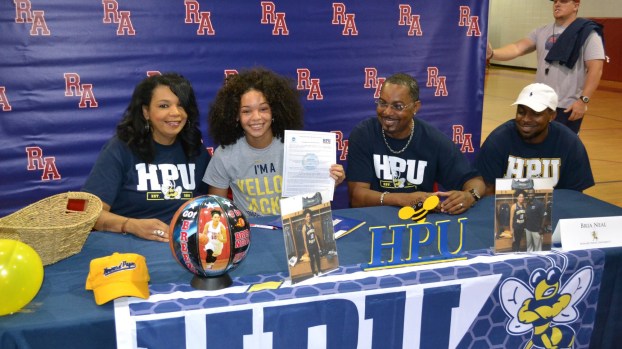 LAPLACE — Bria Neal of LaPlace is driven, ambitious and perhaps the most confident girls basketball player in the River Parishes.

With a shortage of players on the Riverside Academy girls basketball program, Bria took challenges into her own hands with rapid-fire scoring to lead her team to a historic semifinal appearance in 2018.

The next goal she’s shooting for is immediate impact on the DIII Howard Payne University women’s basketball team.

Bria, the daughter of Raffeal and Tina Neal of LaPlace, signed an academic scholarship to Howard Payne alongside family in the Riverside Academy gym.

“I wanted to choose a school that fits me academically,” Bria said. “As a ball player, you want to go to a school where you will get immediate playing time, and I felt like Howard Payne was that choice. I felt like it was home for me. It’s a small school, but it’s a good fit.”

Raffeal has been Bria’s coach since she took her first shot in Biddy basketball at age 4. He was her assistant coach at Riverside Academy and serves as head coach for the middle school team.

Academics have always been top priority for Bria, according to Raffeal, who said his daughter isn’t one to settle for the easiest path.

“She made a decision after attending John L. Ory that she wanted to go to a school where basketball wasn’t known,” Raffeal said. “It would’ve been easier to go to East St. John and play with the girls that she played with during the summer. Riverside Academy didn’t have what we would call a powerhouse (girls) basketball program.”

History repeated itself this year when Bria chose a Division III school.

“They (coaches) were loving her ability and couldn’t understand why she was considering a DIII and not a DI,” Raffeal said. “I said it wasn’t just about basketball. It’s about academics, and that’s the glory of it with her. What she’s going to bring is leadership, sportsmanship and teamwork to her college team.”

Though Riverside Academy had a disappointing 2019 record (6-20), Bria shined in the first round of play-offs against defending championship team St. Katharine Drexel with 28 points, 22 rebounds, four assists and three steals.

Bria Neal is leaving a legacy at Riverside Academy with a career total of more than 1,500 points.

While she also ran track at Riverside and qualified for state in 4×1 and 4×2 relays, as well as the triple jump, basketball has been part of the fabric of her family.

Having her father as a role model was a blessing that forged a strong bond, Bria said. While at Riverside, she paid homage to her older brother, Brandon, by sharing his jersey number.

“I enjoy the atmosphere and how competitive the basketball is,” Bria said. “I enjoy watching it and playing it. I don’t know what I would do without it, to be honest.”

Moving to Texas will be an adjustment, but it’s where Bria hopes to settle after college and, with luck, a successful career in the international basketball circuit.

Bria will study forensic science at Howard Payne University, inspired by her interest in horror films.

RESERVE — There is never a time when the East St. John High football program should be 5-6 for the... read more