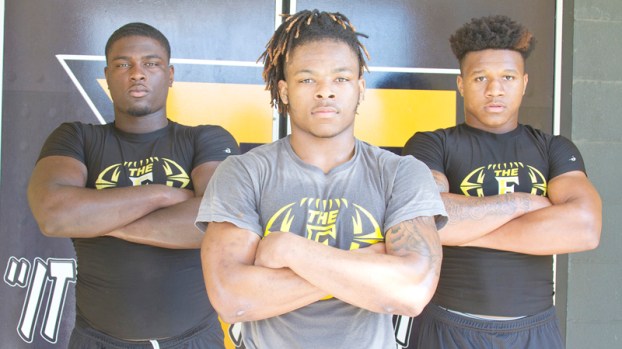 RESERVE — There is never a time when the East St. John High football program should be 5-6 for the season, according to second-year head coach Brandon Brown.

That’s how 2018 ended, but the foundation was laid, expectations were set and Brown said a new championship mentality has come alive in his athletes.

The Wildcats hit the weight room and the field at the end of April and concluded the Spring season in May with a 42-6 blowout win against Ellender.

Intensive, four-days-a-week summer training started this week in Reserve as “the E” prepares to take on the 7-on-7 football league with St. Charles Catholic and 10 other area competitors.

The 7-on-7 league begins June 12 and continues with three 30-minute games on Wednesday mornings throughout the month.

The rotation has not yet been set, though St. Charles Catholic coach Frank Monica said Jesuit, Newman, John Ehret, East Ascension, Saint Amant, Loranger and De La Salle are among the teams confirmed to appear.

It’s East St. John’s second year returning to 7-on-7, and Brown said the squad is bringing an improved offense.

“In the Spring game against Ellender, offensively, we showed great balance,” Brown said. “We passed the ball well; we ran the ball well. We picked up where we left off defensively and made a lot of plays. Offensively, I think we’re much improved.”

Kelan Keller and George Smith get in their work at East St. John High.

The growth is aided by the return of former Wildcats coach Larry Dauterive, who now serves as offensive coordinator.

With tenures at East Ascension, Riverside, Winnfield and Fatima (St. Thomas More), Dauterive’s offensive focus led to a prep coaching record of 228-85-1 and a Hall of Fame designation.

“What he can bring is a wealth of knowledge and experience,” Brown said. “He was the head coach at East St. John for nine years, and he had some great success with some very, very good players.”

The Wildcats have no shortage of offensive talent this year, with wide receivers Dontae Fleming and Markel August shining in the off-season.

Brown said both are gaining interest from college scouts.

Vital to the program is quarterback Sean Shelby, who took over mid-2018 and went on to pass for 1,829 yards and 16 touchdowns.

“In order to catch the ball, you have to have someone throwing it to you, so our quarterback Sean Shelby has done a tremendous job as far as being that offensive leader,” Brown said.

Running back Calvin Gardner Jr.  is proving himself a force in the weight room, according to Brown.

“He’s just an excellent kid. He’s a 600-pound squat guy. We have some weapons on offense.”

Gameplay was strong and balanced in the Spring game against Ellender, which featured four 10-minute quarters to simulate a regular season challenge.

The Wildcats scored four times in the first half with runs by Gardner and Marcus Jackson, along with skilled passes from Shelby to Fleming.

Gardner took a short pass from Shelby on the third-and-long and scored a 69-yard touchdown during the opening possession of the second half.

Marcus Jackson and Rydell Jackson connected on a pass to raise the score, and Tyrone Coleman returned the final touchdown of the game.

Incoming junior linebacker Welland Williams has been a starter since his freshman year and will be one to rely on.

“They’re starting to ask, ‘Why not us?’” Brown said. “I think our kids are excited, and they’re hungry. That early exit was sort of motivational. Going into year No. 2, we’re expecting to have a great year.”