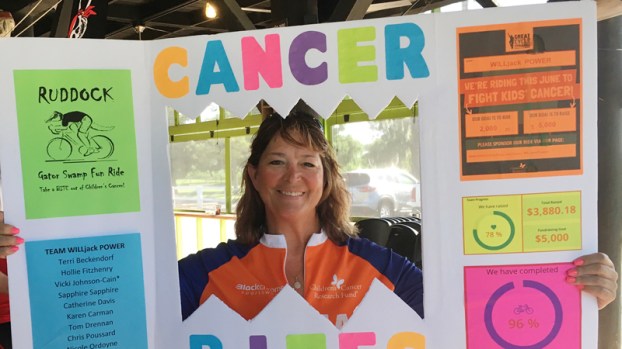 LAPLACE — Vicki Johnson-Cain’s 27-year-old son, William, helped assemble a new bicycle just one month before he was killed in an accidental fall in 2014.

Johnson-Cain has channeled her grief through service in the years since, whether it involves serving sandwiches to flood victims, volunteering to bathe and walk dogs at the animal shelter or running to benefit the St. Charles Fallen Heroes memorial.

Her interest in fitness has turned into thousands of dollars raised for charity, and each spin of her bicycle wheels is a spin of hope for children in need.

In April, she and Bec’s at the Lake Restaurant and Catering owner George Becnel teamed up for a cycling event benefitting autism awareness.

On June 8, they are coming together once more for the second annual Manchac Gator Cancer Ride to raise funds for childhood cancer research.

Check-in begins at 8 a.m. at Bec’s, located at 105 Gary Road down Peavine Road in LaPlace. Riders are asked to make a $25 donation to benefit cancer research.

Starting at 9 a.m., the group will bike up U.S. 51 to the Ruddock exit and back for a 16-mile round trip guided by St. John the Baptist Parish Sheriff’s deputies. The road will be closed for safety, and helmets are required for all riders.

Riders must provide their own bikes and helmets, and participants should be able to keep up a pace of 10 miles per hour for 16 miles.

The group will be treated to a $10 open seafood buffet at Bec’s at the Lake upon returning.

The event, open to the public, is part of Johnson-Cain’s goal to bike 400 miles and raise $500 throughout June for the nationwide Great Cycle Challenge.

“I didn’t lose my son from cancer, but I know how it feels to lose a child. They give me the inspiration to try to help others and give back,” Johnson-Cain said. “I do a lot with the animal shelter, and I’ve done a lot for Special Angels outreach for children with autism and special needs.”

It’s not hard to find someone personally impacted by cancer, according to Johnson-Cain. The need is great, as cancer claims more children’s lives in the United States than any other disease.

More than 15,700 children are diagnosed across the country each year, according to the Great Cycle Challenge. Each week, 38 children succumb to the illness.

In the past four years, the Great Cycle Challenge has raised more than $16 million.

For more information about the ride, visit Bec’s at the Lake Restaurant and Catering on Facebook.

The Great Cycle Challenge is among the biggest cycling events in the country, according to Maria Reitan of Topsail Strategies, media spokesperson for the one-month-long cycling event.

More than 100,000 riders have participated from across all 50 states since the initiative launched in 2014.

Cycling was chosen as the focus to bring family and friends together in a community-based effort, Reitan said, whether participants run in groups or use a stationary bike at the gym.

This year, the goal is to raise $8 million nationwide. Funds are donated to cancer research hospitals throughout the country, including various universities and Children’s Hospital locations.

“We ask riders to set a personal mileage or fundraising goal,” Reitan said. “They ask their friends and family and colleagues to sponsor them.”

PINEVILLE — Louisiana College softball continued its excellence in the classroom during the 2018-19 academic year with 20 players earning... read more