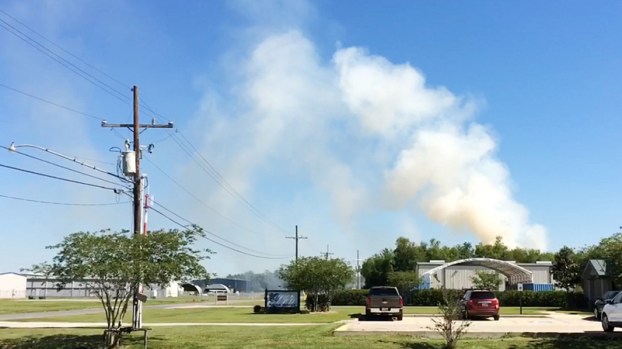 The wood waste incinerator down the road is the consistent culprit, according to Borne, who sees clouds of white smoke emerging from what was permitted to be a smokeless facility.

“Oftentimes, when they light it, the putrid smoke that comes out of it blows all over the businesses in the area,” Borne said. “Sometimes the employees have to go home. They don’t want to have to stay and work in that. We can’t seem to get any restitution.”

Crochet Equipment Co. has managed the Reserve bio-mass and wood waste disposal facility since May 2009.

Trees and wood waste products collected in St. John the Baptist Parish are incinerated for $14,000 per month, with the ash remnants used to fill holes in the work grounds.

The costs of the service are paid for by garbage collection fees, according to Parish President Natalie Robottom.

Borne does not see St. John Parish government or the Department of Environmental Quality poised to take action in a situation he sees as a public health and safety threat.

While taking off in an airplane, Borne had to halt as smoke blew across the runway and completely blocked his visibility.

“It’s very problematic for the businesses because we keep complaining, and the parish keeps telling us there is nothing we can do about it,” Borne said.

Complaints to DEQ have been equally unsuccessful, according to Borne. Episodes of heavy smoke often last an hour to an hour and a half, and DEQ cannot take action unless a representative directly observes the problem, Borne said.

This is problematic because DEQ is based two hours away from Reserve.

“Our contention is just don’t light it when the wind is blowing that way,” Borne said.

Robottom is well aware of the smoke that’s emerged from the smokeless incineration. It’s a mistake she contributes to human error.

“It appears to be problems with management and operation,” Robottom said, adding the person hired to run the system is not always present on-site.

“It’s paid by garbage fees,” Robottom said. “I think it’s well worth what we’re getting. It could be managed better. Mr. Crochet has terminated (employees) before, and he will again.”

Attempts to reach Ronnie Crochet this week for comment were unsuccessful.

Councilman Larry Sorapuru Jr. has been in contact with Borne and others in the area. He raised concerns over the incinerator’s efficiency at a Parish Council meeting earlier this month.

No action was taken, though Council members agreed to look into the matter as Crochet’s contract nears expiration.

“I can smell it,” Sorapuru said about the incinerator. “People at the airport can smell it.”

If not addressed, Sorapuru believes the incinerator could shut down the Port of South Louisiana Executive Regional Airport, located on the same road. One option he sees is to ditch the incinerator in favor of grinding branches into mulch, which could be repurposed in parks and distributed to local gardeners.

“I’m asking to look at the numbers, look at what we’re doing, look at what other companies are doing. We don’t have to make a decision overnight,” Sorapuru said.

Additionally, Sorapuru said tree branches are piled in the facility’s yard and look to have not been touched in months.

Robottom said delays in incineration are for quality control.

“You’re not supposed to burn when it’s wet or when the wind is blowing in a certain direction,” Robottom said, noting a switch from incineration to grinding is not a quick solution.

Councilman Lennix Madere Jr. said workers need some time to catch up from rainy day delays. However, he believes the contracted company should be penalized through fines for operational mistakes.